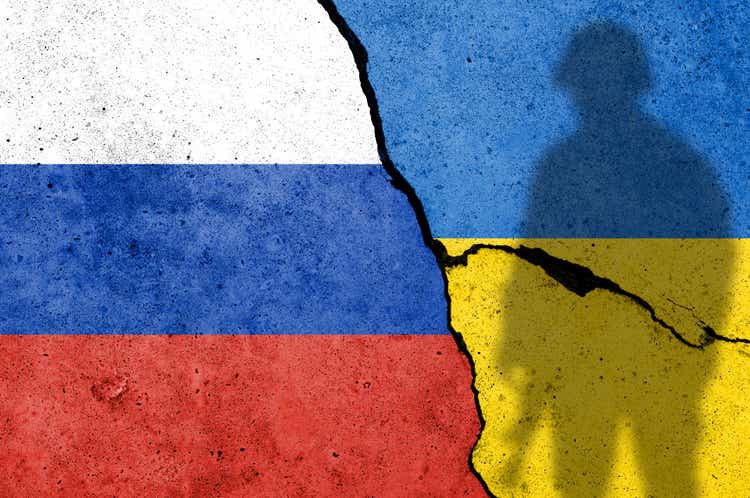 The stock markets are in a rout. While buying the dip is tempting, on this occasion, there are real uncertainties, not just volatility. While inflation remains the flavour of the day, a hawkish policy is probably a good thing for markets. The supply side will catch up too in a couple of years to the fact that COVID-19 has shifted consumption fundamentally from services to goods. The real issue is the Ukraine invasion risk. With there already being an energy crisis, sanctions on Russia in response to the invasion will have a big effect on imports and exports of vital commodities. Moreover, instability in the Ukraine will have direct impacts on the functioning of the commodity markets. We think that inflation could fly if the war in Ukraine comes to pass. While selling stocks is not something we’d do, because you never know what is going to happen, we reposition our funds into stocks of a defensive character, at a discount where possible, with very safe balance sheets. Dassault Aviation (OTCPK:DUAVF) is the ultimate pick in that regard, which will have geopolitical tensions in Europe as a major tailwind as Western European nations realise it’s time to catch-up on their lagging defense spending.

Why is the Market Crashing?

While interest rates going up are never a good thing for equities, in this case it is more ambiguous. The markets have been concerned about inflation for a while, and the higher rates is a legitimate effort to stem consumption while the supply side catches up in the favourable commodities environment to deal with the fundamental shift of consumption from services to goods. It takes about 3-4 years to build out a factory, the timeline for pulp expansions as well as foundries for semiconductor, so we maintain that inflation is transient but must be managed. Regarding the hawkish tones from central banks, safe haven assets like gold and silver have retreated where the USD has come back to the fore, indicating that in some respects there is an optimism returning to the state of the economy. What is unusual is that there is now a concomitant fall in stock prices, which indicates the obvious which is that there is more to the market jitters than the hawkish policies. The concerns are not primarily with the policies of the Fed and other CBs, it’s with Ukraine.

When Will the Stock Market Crash End?

The Ukraine risk is what is really affecting markets. While the issues around inflation and interest rates is one that really only pertains to the next couple of years, where expectations could mean related economic downturns might be discounted by markets who’d look optimistically onwards, meaning only a month or two of downward movements. The situation around Ukraine and a potential invasion by Russia constitutes a real uncertainty, one with rippling effects. The invasion of Ukraine would not just mean continued proxy war in a distant country that has been under de facto cultural and political control by Russia for years, it would mean serious impacts on an already inflamed commodity situation. With an invasion likely to be responded to with further sanctions, where Europe relies on Russia for the plurality of their gas imports, utility prices will skyrocket and the cost of many industries as well as prices will meaningfully rise. In Europe, gas is used as an input for energy production, and gas transmission is pervasive in Europe because it’s a key utility itself. Moreover, logistics costs could rise further as well, which has been the recent culprit for rising consumer prices, due to the possibility of rising prices in oil. Overall, the correction could become more of a crash, and more protracted, if the Ukraine invasion plays out. We see this as quite a major risk for markets, that could turn a week or two of corrections into some months of real declines.

How Can You Protect Yourself from a Market Crash?

Investors need to be looking at Ukraine, and understanding how their exposures could be affected by rising logistic, utility and oil prices. Suzano (SUZ), one of our major investments, is quite protected from gas price increases, with it accounting for a small portion of the cash costs, but could be more impacted by logistics price increases. However, the pulp commodity is very resilient, and the price is supported by supply tightness. With limited commodity risk, we continue to like it as an investment and a personal LBO. Rubis (OTCPK:RBSFY) runs a logistics and trading business, and its refinery business in the French Antilles has fixed unit margins due to regulatory involvement. So no crack spread there to be worried about with the risk of rising crude prices, so it is quite well exposed. Oil investments, even shale oil in the US, could be an aggressive way to approach the commodity situation, due to the innate leverage. This could be a moment where distress costs related to high leverage could fall and make for interesting albeit speculative opportunities. Steel and utilities are at risk, as well as other metal businesses, due to the intensity of energy for their production. Cement could be affected as well, with energy prices having hurt the likes of many European cement companies over the last couple of quarters. This could ripple into the housing and construction market.

The best of all exposures though is European defense, specifically Dassault Aviation. They beat out the F-35, a 4x price and supposedly the most state of the art military craft on the market, in a major $18 billion deal with the UAE. Their Rafales are a good value for most militaries, and better suited for modern warfare than BAE Systems’ (OTCPK:BAESF) Typhoon, which is more oriented towards dogfighting. Moreover, their private jet business has been one of the few resilient segments of aviation in the pandemic era. Moreover, with much of Europe lagging in terms of minimum NATO defense spending, geopolitical tensions, regardless of how they result, will have governments thinking about spending their money on jets. The Rafale has a fully integrated European production, and might have favour over the Typhoon also because of the politics around Brexit. Dassault also has a negative net debt, meaning no interest rate risk. Small supply of jets and longer timelines for production also give Dassault flexibility with respect to supply chain issues and input cost risks.

Exposures in defense and other conservative sectors with limited supply chain risks are the way to go in the current market. Ground commodities that can be processed and produced with less energy intensity are favourable, as is oil which will be directly supported in the event of sanctions on Russia where their cost bases are substantially fixed. Businesses where margin is at risk, especially gross margin, from rising energy input costs would be stocks to give a wide berth at this point in time, like many European utilities with large CCGT exposures. Moreover, companies highly dependent on low oil prices, like for example the refining sector, should generally be viewed with caution due to crack spread risks. While leaving the market is an option, selling low is never fantastic. Better to ride out the situation with clever repositioning, and even selectively buying the dip in low multiple and conservatives stocks where the narrative around their sectors’ risks are immune or even supported by rising geopolitical tensions and further stress on commodity prices.

Editor’s Note: This article covers one or more microcap stocks. Please be aware of the risks associated with these stocks.

Quotes That Will Help You Understand The Benefits Of An Embrace