Why VTIP And STIP Are The Stock Market’s Best Groundhog (NYSEARCA:VTIP) 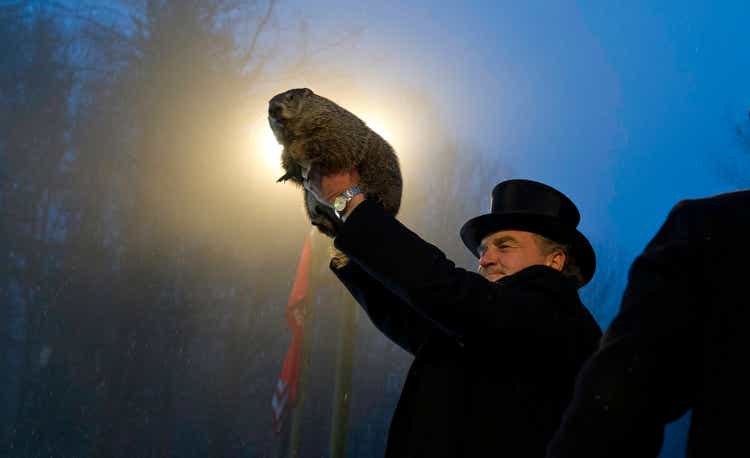 When investors look at the market’s trend, they often focus on the most significant stock market indices such as the Dow Jones or S&P 500. Others look at the performance of the largest companies such as Apple (AAPL) or Microsoft (MSFT). While there is undoubtedly value in keeping an eye on these big names, investors should realize that everyone is also closely tracking the same information. This can often cause widespread emotions and whims to obfuscate the underlying trends that can inform investors of the market’s direction.

Put simply, if investors want an edge, they have to look for information that few others are watching. This is crucial in today’s media landscape that, in my opinion, creates monotonous headlines and minimal diversity of thought across platforms, particularly when it comes to financial media (see “The Buzzword Economy”). After recently publishing my bearish market view in “The Stock Market Crash Is Likely Only Beginning,” I’d like to give readers a more tangible asset to watch that can aid in determining appropriate investing or trading decisions. Obviously, no asset can predict stocks perfectly, but some are far better than others.

One simple example is to track the small-cap Russell 2000 instead of the S&P 500 or Dow Jones since smaller companies are typically a much more accurate indicator of the economy due to their higher sensitivity and generally lower retail investor interest. Indeed, the Russell has been flat for almost a year, more accurately indicating the ongoing downtrend in GDP growth forecasts. While the Russell 2000 may be a more accurate economic bellwether, I propose that investors in the stock market may benefit tremendously from keeping an eye on the bond market. In particular, inflation-protected short-term interest rates.

In general, most bond investors are institutions or long-term investors, giving bond prices less exposure to those emotional whims and short-squeezes that can create false signals in the stock market. This is likely why the Federal Reserve determines its decisions based on the yield curve (as a leading indicator of GDP) and the inflation-breakeven rate, not the stock market. The latter is measured by the difference in yields between inflation-protected Treasury bonds (or TIPS) and conventional Treasury bonds. These two measures over the past five years give us significant insight into actual market conditions. See below:

The yield curve fell to inverted territory in 2019, accurately predicting the 2020 recession. The curve then steepened dramatically as the economy had a surprisingly strong recovery. Today, the yield curve is rapidly flattening as that recovery seems to be ending due primarily to the negative impacts of inflation. On that note, the inflation breakeven rate indicates that inflation is likely to average around 2.4% per year for the next decade. Notably, the ongoing rise in interest rates has only caused a slight decline in the long-term inflation outlook, indicating that relatively aggressive measures may be necessary to keep inflation in check.

These two measures can inform investors every day about what the market “thinks” about future economic conditions. Such concrete data can be far more helpful than mainstream beliefs and opinions regarding the economy, which, in my view, are often plagued by cognitive dissonance. That said, while the yield curve and inflation breakeven rate are excellent sources of economic information, one of the best groups of indicators today is likely real interest rates. These are interest rates minus the expected inflation rate, which directly inform investors of the actual economic value of money. The real value of cash is extremely low today, encouraging people to reduce savings and either spend money in the economy or invest in assets with higher expected real returns. Thus, when real rates are low, people generally spend more and save less cash, increasing the inflation rate.

I covered real rates last in December in “TIP: Federal Reserve Tapering To Boost Real Interest Rates,” detailing how the need for accelerated tapering would likely cause a spike in long-term real interest rates. As expected, there was a substantial spike in real rates this month, triggering the sell-off in stocks:

As the U.S long-term real interest rate rose slightly from its all-time lows, the real value of cash rose. Real rates are still negative, so it is unlikely that more people will increase savings. However, the rise in real rates also means the real cost of borrowing money is rising. Over time, this encourages (or forces) companies, governments, and households to reduce borrowing. Indeed, such measures are likely necessary to stop inflation from becoming uncontrollable. Thus, if we continue to see a rise in real interest rates, then we should expect stocks, bonds, and potentially even commodities to decline in value.

I usually focus on long-term real interest rate measures such as the ten-year inflation-indexed Treasury bond yield. However, since we live in a period with significant short-term volatility, there is some added benefit from focusing on short-term interest rates. This is particularly important since the COVID lockdown era caused a huge spike in short-term corporate borrowings. Since short-term interest rates are spiking as that debt matures, many of these firms will need to roll the debt forward at higher rates, meaning their interest expenses will likely soar. Indeed, as shown below, the short-end of the yield curve is currently rising at a breakneck pace:

Notably, the markets and the economy do not react to the Fed’s 1-month interest rate; they respond to expected multi-year interest rate hikes since most companies, governments, and households do not borrow significant sums at a 1-month maturity. It is entirely possible that, as investors brace for a long series of rate hikes over the coming years, the economy enters a recession before the expected rate hikes occur. Still, while short-term rates have a substantial economic impact, they are often jawboned by the small details of Fed minutes. In general, short-term inflation-indexed bond yields have far less dependence upon Fed expectations and serve as a direct measure of the real short-term value of money.

One popular way to invest in short-term inflation-indexed bonds is through the Vanguard short-term inflation-protected Treasury bond fund (VTIP) or iShare’s equivalent (STIP). These funds are indexed to the consumer price index and have risen tremendously since 2020 with the CPI. Since so many investors are looking to hedge against inflation, these funds have negative real yields, with the five-year inflation-indexed Treasury currently at -1.1%. See below:

As you can see, the total return of VTIP (which includes inflation payments via a dividend) since last January is around 4.5%. While VTIP’s dividend yield over the past twelve months is currently 4.7%, it would be inaccurate to state that VTIP’s forward yield is the same since this is primarily due to the spike in inflation. Importantly, the Federal Reserve does not openly publish data on 1-4 year inflation-indexed bond real yields but given iShares equivalent fund STIP currently has a real yield of -1.83%, VTIP’s is likely about the same. Both VTIP and STIP have a weighted-avg maturity of 2.5 years. A 2.5 year “normal” Treasury bond currently has a yield of ~1.3% (interpolating the two years and 3-year rates), so this informs us that the bond market’s expected inflation rate over the next 2.5 years is roughly 3.1% (1.3% minus negative 1.8%). Thus, VTIP is expected to have a dividend yield of ~1.3% per year over the next two years, likely with a higher return this year and lower next as the CPI decelerates.

Both VTIP and STIP have shown a clear topping pattern, with their prices peaking around the first half of 2020. Unsurprisingly, this is the same time that the most speculative stock funds like ARKK and economically sensitive stocks like the Russell 2000 IWM peaked. This is likely since short-term real yields are likely the primary driver of short-term financial market conditions. In my view, this is a strong indication that the declining pattern in VTIP and STIP are leading the stock and bonds markets lower.

Looking specifically at a short-term chart of STIP, we can see the fund hit a triple-top throughout last year and is now below its “swing low” (or support level), strongly indicating further downside. See below:

STIP has some support at $105 as it fluctuated around this level exactly a year ago. However, if it firmly breaks below $105, it will likely crash to its next likely support level of ~$103.5-104. This means real short-term rates may soon spike at a rapid pace. As the International Monetary Fund recently explained, such an occurrence has a high potential of pushing asset prices down.

I am somewhat bearish on VTIP and STIP as investments today. Like the longer-term TIP, they are great hedges against inflation and, in many respects, are superior since their lower maturity minimizes their duration risk. Indeed, unless the expected inflation rate declines sharply, both VTIP and STIP will likely offer a higher real return than cash savings. However, I expect the prices of these funds to continue to decline over the coming months since it seems unlikely inflation will slow as long as Treasury bonds have negative real yields. I will reconsider if VTIP reaches its long-term average of ~$49 (~$100 for STIP) (~4% below their levels today), as they would be inflation hedges without immensely negative real yields at that point.

That said, I believe investors and analysts would benefit from closely tracking these funds since they’ve been leading the stock market and conventional (non-inflation hedged) bond market over recent years. However, short-term real yields directly impact markets since they determine actual borrowing costs for most companies (given high shorter-term debt levels due to COVID debt) and the actual returns on bank account savings after inflation. Few investors watch short-term real yields, and the Federal Reserve does not even publish that data. However, since STIP and VTIP move inverse to short-term real yields, they allow investors indirect access to this critical data. In my view, STIP, in particular, is an excellent instrument to watch since its price is steadier. If that fund continues its trend lower, I firmly believe most stocks will follow suit, but stocks may continue to rise if it bounces back up.

What the wave of tech layoffs tell us about the economy

Opinion: A divided government will be disastrous for the US economy