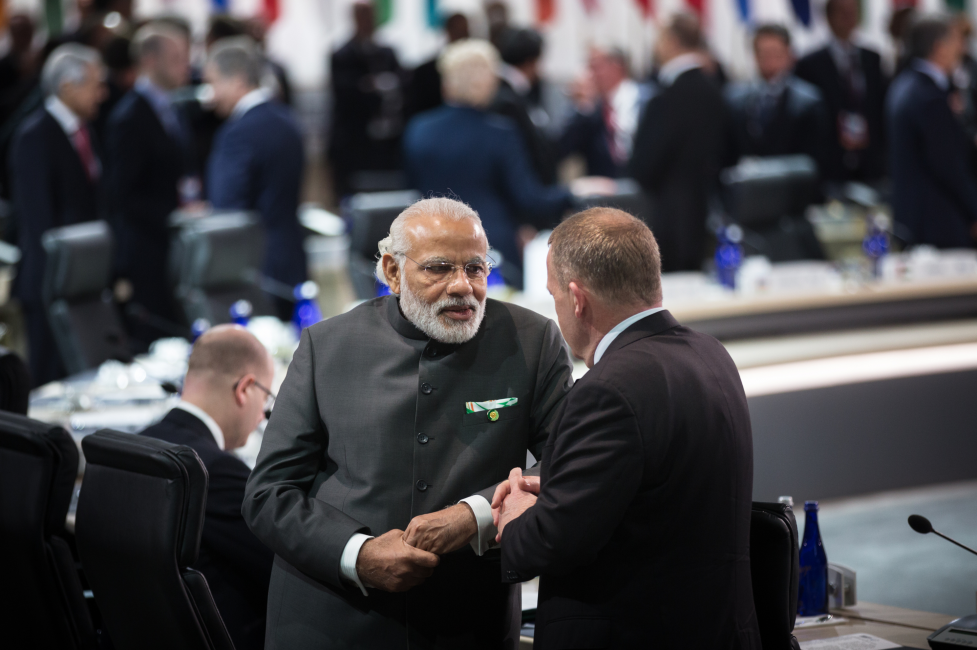 It has been a decidedly contrasting picture for the economies of India and the United Kingdom in recent years. The UK faces a massive cost-of-living crisis predicated on double-digit inflation; it is set to face a deep recession that could well last throughout all of next year as consumers battle sky-high energy prices, and the country endures a vulnerable economy that continues to underperform following its decision to leave the European Union (EU). In contrast, India has consistently been among the world’s fastest-growing major economies during the last decade. And although the virus did take its toll on the South Asian heavyweight’s economic progress, annual gross domestic product (GDP) growth figures of 20.1 percent, 8.4 percent, 5.4 percent, 4.1 percent and 13.5 percent in the five most recently reported quarters through the second quarter of 2022 show that it has once again resumed its steep growth trajectory.

As such, the International Monetary Fund (IMF) noted that, as per the quarterly GDP numbers in current dollars for the period ending December 2021, India surpassed the UK and then increased its lead in the quarter ending in March. On an annual basis, India’s economy will hit $3.47 trillion in the 2022-23 financial year, while the UK’s will be $3.2 trillion. Over the last decade, India’s economy has vaulted up the global rankings from the 11th position to the 5th, while its share of global GDP over the last eight years has climbed from 2.6 percent to around 3.5 percent today.

The response to this achievement from India itself has been a largely jubilant one. “Recently, India achieved the feat of becoming the world’s fifth-largest economy. This achievement gave us confidence to work harder and achieve bigger goals in this Amrit Kaal,” Prime Minister Narendra Modi declared. “This is no ordinary progress. It fills every Indian’s heart with pride. We need to maintain this enthusiasm.” It also did not go unnoticed that India—a former British colony—surpassed the UK in its 75th year of independence.

But how truly significant an achievement is this recent entry into the Top 5 for India? After all, at nearly 1.4 billion people, the country lies behind only China in terms of total population; at its current growth rate, it is almost certain to become the world’s most populous country within the next couple of years. This means that, on a per-capita basis, India continues to languish at the lower end of the global rankings; according to the World Bank, GDP per head was a mere $2,277 in 2021. In contrast, China’s per-capita GDP was $12,556, and the UK’s a hefty $47,334.

India is still among the poorest countries in the world and remains formally classed as a low-middle-income economy. It is home to the world’s largest number of poor people, and, therefore, it continues to invite much-warranted criticism over the type of growth that has transpired—growth that has dramatically widened inequality and not done enough to engage the whole country.

As such, addressing this inequality is arguably the biggest economic challenge faced by India today. According to the “World Inequality Report 2022”, while the top 10 percent and top 1 percent hold 57 percent and 22 percent of total national income, respectively, the bottom 50 percent’s share has fallen to just 13 percent. And from a wealth perspective, last year saw the wealthiest 10 percent and 1 percent of the population own 65 percent and 33 percent, respectively, of total household wealth (all financial and non-financial assets, net of debts), while the bottom 50 percent owned a mere 6 percent of the total—meaning that India stands out as “a poor and very unequal country, with an affluent elite”, the report noted.

Of course, it is clear to most now that solid progress in reducing extreme poverty has been made over the last decade. The “2022 Global Multidimensional Poverty Index Report”, recently published by the UNDP’s (United Nations Development Programme’s) Human Development Report Office (HDRO) and the Oxford Poverty and Human Development Initiative (OPHI), found that India’s progress in reducing poverty has both outranked countries worldwide and contributed to the overall decline in poverty in South Asia. The report used a Multidimensional Poverty Index (MPI) to produce a more comprehensive gauge of poverty, measuring 10 indicators across (i) health: nutrition and child mortality; (ii) education: years of schooling and school attendance; and (iii) standard of living: access to drinking water, sanitation, cooking gas, electricity, housing and assets.

“The reduction in Multidimensional Poverty Index (MPI) value in India was swift across the two most recent periods,” the report noted. “MPI estimates based on the recently released 2019-2021 Demographic and Health Survey for the country show that 415 million people exited poverty between 2005-2006 and 2019/2021—including about 140 million since 2015-2016—and that the country’s MPI value and incidence of poverty were both more than halved.”

But although efforts are clearly being made to reduce poverty across India, the MPI report also showed that persistent problems remain that must be addressed, especially with such concerning statistics as the fact that two-thirds of those vulnerable to poverty “live in a household in which at least one person is deprived in nutrition” and that, based on 2020 population data, “it has by far the largest number of poor people worldwide (228.9 million), followed by Nigeria (96.7 million projected in 2020)”. Much of this vulnerable population is concentrated in rural areas, where the percentage of the poor is 21.2 percent, compared with just 5.5 percent in urban areas. “Rural areas account for nearly 90 per cent of poor people: 205 million of the nearly 229 million poor people live in rural areas—making them a clear priority. Only 23 countries covered have a higher proportion of poor people living in rural areas,” the report added.

It should also be observed that, in terms of civilisational states, China and India have historically represented the world’s two biggest economies for longer periods of time than any other. It is also interesting to note that the modern incarnations of their sovereign, independent states both started around the same time in the late 1940s. China looks almost certain to reclaim its global economic primacy once more—and well before the end of this decade.

Can India follow in its neighbour’s footsteps and return to such dizzying heights? This certainly seems to be the aim, with Prime Minister Modi confirming in August his goal of turning India into a developed nation within a 25-year timeframe. “Hundreds of years of colonialism has restricted our sentiments, distorted our thoughts. When we see even the smallest thing related to colonialism in us or around us, we have to be rid of it,” Modi added, noting that India should crush the “termite” of corruption and nepotism and follow an “India First” mantra and further that self-reliant India “is the responsibility of every citizen, every government, every unit of society”.

From a historical perspective, therefore, becoming the fifth-largest economy should be little more than a stepping stone—albeit a welcome one—on the journey towards fulfilling much loftier ambitions. Which exact position it occupies in, say, 10 or 20 years should perhaps not be as relevant as ensuring that it can build a robust economy that works for the entirety of its vast population and thus incentivises its hundreds of millions of poor citizens to escape poverty. This will not only improve the quality of economic growth India generates in the coming years but also provide a dividend for the economy to maximise its boundless potential.

For some analysts, this means avoiding the pitfalls of neoliberalism, to which many Western economies—and plenty of non-Western ones—have succumbed, only widening inequality to extreme degrees as policies promoting the accumulation of private wealth above all else were adopted from the 1980s onward. “We now know that…the Reagan-Thatcher revolution…was the starting point of a dizzying rise in inequality within countries that continues to this day,” the “World Inequality Report 2022” observed. “When state control was (successfully) loosened in countries like China and India to allow private sector-led growth, the same ideology got trotted out to justify not worrying about inequality, with the consequence that India is now among the most unequal countries in the world (based on this report) and China risks getting there soon.”

Nonetheless, given the wondrous feats China has achieved in recent years in lifting hundreds of millions of its own citizens out of poverty, many believe India should try to replicate some of the policies its fellow Asian superpower has adopted. According to a recent report from the World Bank, China lifted 765 million people from extreme poverty between 1978 and 2019; it declared that it had eradicated extreme poverty in 2019; its life expectancy at birth soared from 66 years in 1978 to 77 years in 2019; and its infant mortality rate dropped from 52 per thousand infants in 1978 to just 6.8 in 2019. “India, with the largest pool of poor people on the planet, can learn a lot from China, which pulled 765 million out of extreme poverty between 1978 and 2018; that’s roughly 2 crore people [20 million] being pulled out of abject poverty every year for four decades,” an October 11 article from the news publication the Indian Express stated.

India may not have the structural flexibility or, indeed, the political appetite to attempt to duplicate China’s measures, which have led to a phenomenal economic transformation over the last 40 years. But it can always divert more resources towards turning its millions of poverty-stricken citizens into a crucial combined growth engine. To India’s credit, such policies are being pursued. Modi recently noted that as many as 30 million houses “were built by the government across the country for the poor in the last eight years”. But it seems increasingly apparent that profound policy changes are required to prevent India from succumbing to the pressure of prioritising free-market economics at its people’s expense.

Badly Decomposing Torso Found Inside Suitcase Hidden In Bushes: ‘Limbs Were Chopped Off’