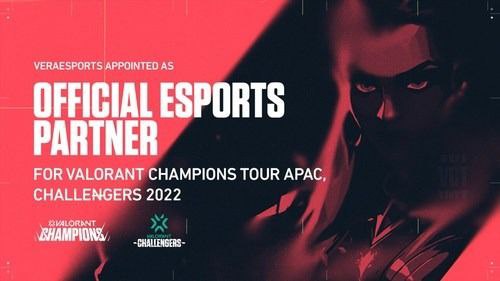 VALORANT Champions Tour Asia-Pacific, Challengers 2022 edition, has chosen VeraEsports as its official eSports partner and exclusive content platform. The event is operated by one of the largest video game publishers, Riot Games.

While talking about this partnership, RJ Mark of VeraEsports says, “we are proud to renew and enhance our partnership with Riot Games and the VCT. Enabling new and breakthrough community experiences is our goal, and this year we bring even more value through an exclusive VCT content hub on VeraEsports. The community will now be able to Watch and Earn across both VOD-based content and live broadcasts.”

The Asian market for eSports is booming, having raked in $543.8 million in revenue in 2020, marking a 4.9% growth rate in the 2019-2020 period. In terms of viewership, the number of eSports viewers was 618.4 million in 2020, which points to a growth rate of 21% compared to 2019, when the number of eSports viewers stood at 510 million. Considering the vast potential of the eSports market in Asia, this partnership can be fruitful for the further growth of eSports in Asia and beyond.

VALORANT Champions Tour APAC: What You Should Know About it?

The VALORANT Championship Tour APAC is a part of the Los Angeles, California-based Riot Games. It is a year-long 5v5 character-based tactical game consisting of three levels, named Challengers, Masters, and Champions.

With 1200 participants from the APAC region in its first season that took place in 2021, VALORANT is coming out as a leading name in the eSports domain. The 2021 season of VALORANT had an average of 500,000 viewers throughout the tournament, with the highest number of viewers being one million. With this, it has massed over 46 million gameplay views worldwide so far.

“This partnership reflects the great strength and growth potential of the VCT in the region. Despite VALORANT Esports being launched only about a year ago, we’ve had an amazing level of engagement and passion from our community. We look forward to working with VeraEsports on making VCT APAC even better this year by bringing the very best VCT content to our players and fans across the region.”

Ubeswap: Why You Should Farm SOURCE Tokens on the Protocol