UniX Gaming Positions Itself As King Maker In The Sandbox Metaverse 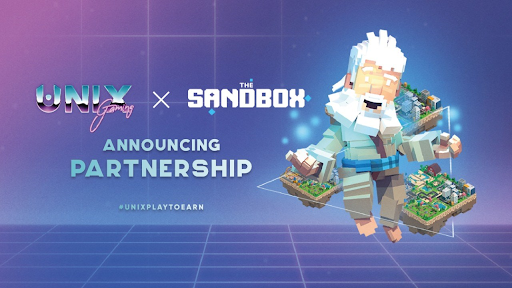 UniX Gaming is aiming to become an ecosystem builder within The Sandbox Metaverse, leveraging its Unity-based game-maker tool. The plan is to create a gameplay prototype that partners can use to create unique gaming mechanics that will evolve into new experiences within The Sandbox.

UniX Gaming is well known in the play-to-earn gaming space. It’s said to be the largest of Metaverse “guilds”, which lend NFTs to up and coming gamers, giving them an opportunity to compete with other players and earn big rewards that are then split with the guild. The issue with play-to-earn gaming is that it has a very high barrier to entry, requiring new players to purchase expensive NFTs before they can get started. UniX Gaming, like other guilds, has amassed a collection of NFTs that it will loan to players through scholarships. It also provides support through eSports training and educational materials to ensure those players’ careers are successful.

UniX Gaming is nothing if not ambitious though. Besides supporting talented young gamers with a focus on developing nations, it is also developing its very own play-to-earn titles, with Bibits Game and Vigilance 2099 both said to be works in progress. In addition, UniX Gaming has also created a Launchpad for third-party play-to-earn games, helping them raise funding and awareness through Initial Game Offerings and marketing campaigns.

That explains why it’s such a great fit for The Sandbox, which is one of the best-known and most popular Metaverses of all. The Sandbox can be thought of as a decentralized virtual world, where participants can purchase digital real estate, build immersive 3D worlds and design and create NFTs such as avatars, virtual goods and games. The platform allows users to design gaming experiences, play games, win and trade NFTs on the Sandbox Marketplace.

As one of the largest games in the Metaverse, The Sandbox has attracted the attention of big name brands such as Adidas, The Walking Dead, Deadmau5, Atari and Rollercoaster Tycoon, which have all created their own virtual worlds on the platform.

The Sandbox is becoming increasingly popular and many more brands and companies are looking for an entrance to the Metaverse, buying up digital land within it. However, most lack the expertise to develop their Metaverse estates by themselves, hence the need for an ecosystem developer such as UniX.

UniX will offer its game maker tool to help brands create environments, buildings, stores or whatever they want within The Sandbox. In addition, it will also use its expertise to help brands create what it calls “mini-games” and social areas for their followers to play and interact. As a gaming guild, these mini-games will be a main area of focus and UniX is already working on a classic, Japanese style pinball game called “Pachinko” and more complex games.

The partnership will increase UniX’s exposure within the Metaverse and it will add to that with the creation of its very-own virtual world. UniX will also focus on bringing its educational content into The Sandbox as part of its ongoing effort to make play-to-earn gaming more accessible for all.

“Establishing ourselves as the number one developer in such an immense platform in the metaverse will further improve UniX’s standing within the Play-to-Earn world and increase our renown in the space,” UniX said in a blog post on Medium. “It will also provide the opportunity for many more high-profile partnerships with massive brands. As a knock-on effect, our token price will increase, and all our current holders and investors will see their wallets improve as a result.”

As another benefit of the partnership, UniX community members will also gain first dibs on new rewards within The Sandbox, including NFT drops and tokens associated with its Metaverse mini-games.

“[UniX is] one of the fastest-growing and best guilds we saw so far, and their dedication to building a better community thanks to Creator skills and Building skills learning is a much-needed element for our ecosystem,”