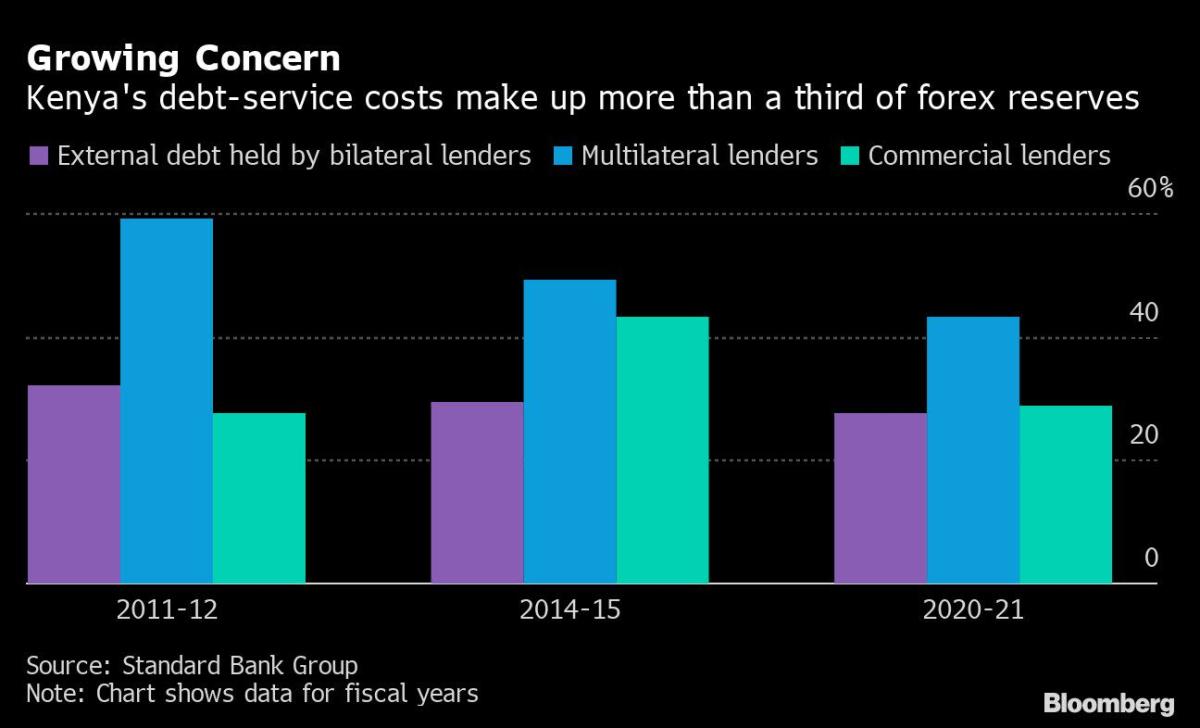 Most Read from Bloomberg

U.S. consumer prices surged to a fresh four-decade high in January, adding pressure on the Federal Reserve to be more aggressive in its highly anticipated rate-hike cycle.

The Bank of Russia delivered its third 100 basis-point rate increase in less than a year, while Poland boosted borrowing costs to the highest since 2013. The Bank of Israel may be pressed to move with greater urgency as inflation risks overshooting the government’s target.

Here are some of the charts that appeared on Bloomberg this week on the latest developments in the global economy:

Consumer prices surged in January by more than expected, sending the annual inflation rate to a fresh four-decade high and adding more urgency to the Fed’s plans to start raising interest rates. There were few signs that prices of merchandise are coming off the boil, and services costs are accelerating. On a year-over-year basis, goods inflation registered the biggest gain since 1980, while services costs jumped the most in 31 years.

The U.S. trade deficit grew in 2021 to the largest on record, reflecting a surge in the value of consumer-goods imports as the pandemic discouraged spending on services and drove more outlays for merchandise. On the West Coast, where the worst of the bottlenecks have been occurring since late 2020, the situation looked somewhat improved.

Cargo ship congestion along the U.S. East Coast is rising outside ports from Virginia to South Carolina, data compiled by Bloomberg showed, as waves of imports combined with recent bouts of severe weather hamper trucking capacity.

The U.K. economy expanded last year at the fastest pace since World War II after suffering a milder hit than expected in December. The 7.5% expansion was the largest since 1941 and made Britain the fastest-growing advanced economy in 2021.

The mood among Japanese merchants tanked in January, plunging the most since the March 2011 tsunami disaster amid the rapid spread of the omicron variant. A gauge of sentiment among store managers, taxi drivers and others who deal directly with Japanese consumers slid 19.6 points to 37.9 last month. A below-50 reading indicates pessimists outnumber optimists.

The Bank of Israel sees signs of higher inflation this year than previously forecast, which could tilt policy makers to reconsider their stance on how to emerge from near-zero interest rates.

Five key African economies will face debt risks over the next two years, according to the continent’s biggest bank, as an era of extraordinary pandemic-induced stimulus and relief for poor nations draws to an end.

Lithium’s vital role in electric-vehicle batteries means automakers, miners and investors are racing to figure out how much supply the world will need in the coming years — and also how much it’s going to get. The problem is the predictions vary wildly.

Central bankers in Russia, Mexico and Iceland used their first monetary policy meetings of the year to increase interest rates this week. Poland increased borrowing costs for a fifth consecutive month to an almost nine-year high.

Most Read from Bloomberg Businessweek

Doctor Hunt tends to an economy in intensive care

Easing Of Inflation Changes The Game For Wall Street…For Now