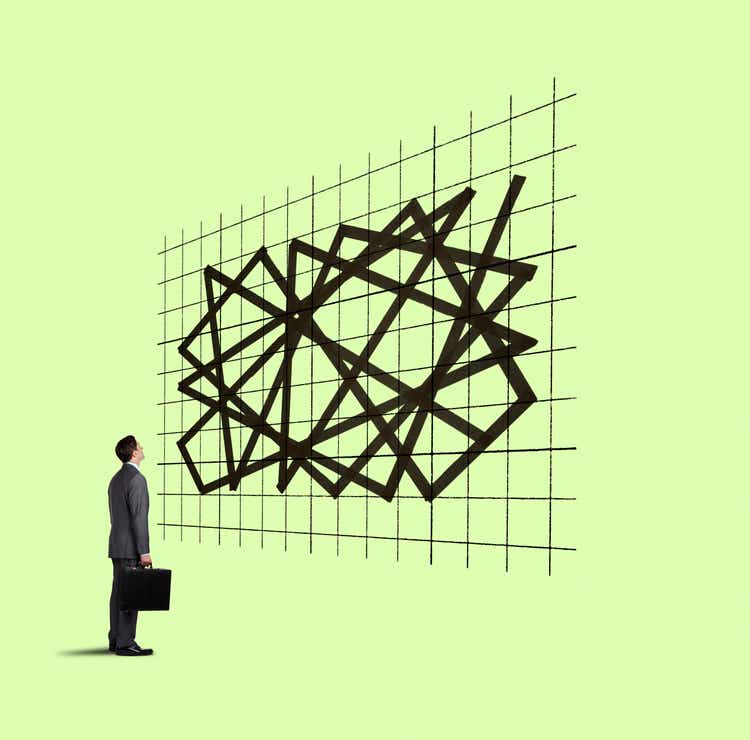 Volatility is dominating the stock market these days.

In other words, uncertainty seems to be everywhere.

The index of market volatility, the VIX index has spent the last three weeks in the 20.00 to 30.00 range, most toward the upper end. This tends to be on the higher side of the volatility range.

And, market performance reflects that fact. Look at the market in this past week.

Furthermore, as more and more people are beginning to realize, market volatility can be driven by one particular segment of the marketplace.

Obviously, swings in the prices of these stocks can have a major influence on the overall results of the market.

And, this week has seen a lot of variation in their quarterly earnings reports.

You had Meta posted its largest loss ever on Thursday and the market swung downwards. The swing downwards gave Meta the honor of suffering the largest, one-day loss of market value ever.

Then on Friday, Amazon posted a surge in earnings and the market swung upwards. That day, Amazon experienced the largest-ever one-day gain in market value.

Analysts are beginning to argue that investors are starting to shift their preferences in the tech area.

“investors have shown they have more faith in the tech companies whose services as seen as staples than in those whose offerings are more elective.”

“Wotjom tech we’re starting to see a delineation between necessities and wants.”

“In a rising rate environment, you’re going to have noncorrelated moves in the market.”

And, given the weight that these companies carry in the indexes, it is no wonder that you are seeing such large swings.

Then there is the Federal Reserve.

Last month, as I have written, the stock market took a negative swing down as investors worried about what the Federal Reserve was going to do with monetary policy going forward.

The Fed then firmed up its message that it would begin to increase its policy rate of interest beginning in March. By March, the Fed was planning to reduce its monthly purchases of securities to zero.

By the end of the week, however, investors began to lose some confidence in the Fed.

The Federal Reserve did not seem to be tapering as much as its leaders had implied, and there was a growing concern about whether or not the Fed would actually start to shrink its securities portfolio in the coming months.

In other words, the Fed’s actions seemed inconsistent with what the Fed had been saying about the future of its monetary actions.

A market indication of this concern was the drop in the value of the U.S. dollar in the foreign exchange markets.

This move was reinforced by the fact that the Bank of England raised rates for the second time in recent weeks and Christine Lagarde, president of the European Central Bank, indicated that she now was ready to begin discussions about the ECB raising interest rates.

The Fed’s unclear signals along with the moves of the BofE and the possible moves of the ECB turned market traders to drop the dollar.

Events seemed to be moving away from the Federal Reserve.

Then there was the news that came out on Friday that the U.S. economy added 467,000 jobs in January.

Economists had only been expecting a gain of only 150,000.

President Biden jumped on these data and called a press conference and bragged about the great shape of the economy and how everything seemed to be showing historical performances.

Investors’ first reaction to this was to show concern that the stronger economic numbers would justify a “tighter” Federal Reserve policy than had been anticipated earlier. This was not good for the market.

But, then the investors reversed themselves, arguing that these numbers were actually a good thing and would not result in tighter monetary policy.

“Central bank officials have in recent days played down speculation that they might raise interest rates by a half percentage point in March instead of a quarter-point.”

“But, they have also said that their rate increases will be guided by data.”

The feeling is that the Fed is not going to rush into a much more restrictive monetary policy. The Fed is going to take its time and adjust in a way that seems appropriate, given the data they are receiving.

Hence, investors continued to buy stocks through much of Friday afternoon.

There still is a big concern with what is happening in commodity markets.

For example, oil prices rose constantly through the past week. Crude oil futures ended last week at $87.20 a barrel. They ended the week at $92.22 a barrel.

Many other commodities hit yearly highs during the past week

The Bloomberg commodity index ended the week at 109.57.

Price increases seem to be on the rise and they also seem to be sustainable.

The feeling seems to be that these will continue to rise further throughout 2022.

Looking at the future we have to deal with Russia and the Ukrainian situation. Then there is the rumbling in the middle east. And then there is the current discontent between China and the U.S. And, the mid-term elections in the United State that could bring in a Republican Congress to deal with the Democratic President.

Furthermore, we really don’t know what the Federal Reserve is going to do.

So, there are plenty of unknowns, many of them of major import, facing the investment community just around the corner.

Radical uncertainty is still the call.

Volatility is still the result.