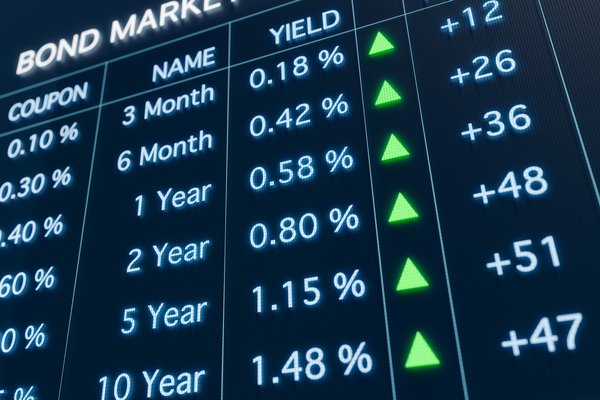 You might think the stock market is huge, but the bond market is even bigger. According to the Securities Industry and Financial Markets Association (SIFMA), the global bond market was worth $126.9 trillion at the end of 2021, compared to the $124.4 trillion global equity market cap. The gap between the two has likely widened in 2022 as stock prices have fallen.

Although many stock investors may ignore the bond market, fixed income markets influence both the stock market, since bonds compete for investment dollars with stocks, and the overall economy. So it’s important to understand the bond market even if you have no intention of owning bonds.

If you are considering investing in bonds, there are number of different options at your disposal, including corporate bonds, municipal bonds, treasuries, mortgage bonds, and others. In this deep dive into everything about the bond market, we’ll review the different kinds of bonds, how the bond market works, how it compares to the stock market, and the pros and cons of investing in the bond market.

What is the bond market?

The bond market refers to the global exchange of debt securities. Unlike the stock market, bonds aren’t typically traded on an exchange like the New York Stock Exchange. Instead, bonds are usually bought and sold over the counter through broker/dealers. That’s partly because bonds have a range of maturities, coupons, and credit ratings, which makes the bond market more complex than the stock market where most companies tend to just have one class of stock available to the public.

Bonds are priced primarily according to two factors: interest rates, which determine how an existing bond compares to a new bond, and the creditworthiness of the borrower. Bond prices, especially for corporate bonds, can fall if investors are concerned that the borrower may become insolvent.

Bonds can be bought and sold in two different ways — through the primary market and in the secondary market.

On the secondary markets, bonds are bought and sold between investors through a broker. In a sense, bonds on the secondary market are traded like stocks, from investor to investor rather than from the borrower or company. Although bond prices and bond yields can change over time, their coupons and maturities do not, which means bonds generally tend to be less volatile than stocks.

The corporate bond market is made up of publicly traded and privately held companies that sell debt to finance capital projects. Corporate bonds tend to offer higher yields than other types of bonds, although yields can vary widely from company to company depending on credit ratings and current business prospects. Corporate bonds are divided into investment-grade, which includes any debt rated BBB- or better, according to the Standard & Poor’s rating scale. A bond with a lower rating is called a junk bond or high-yield bond. Those will pay investors a higher coupon rate, but they also come with greater default risk.

Municipal bonds are sold by cities and states. Often called munis, the bonds help local governments raise money for a variety of capital projects such as roads, schools, parks, and other infrastructure. Municipal bonds tends to be riskier than government bonds but safer than corporate bonds. Occasionally, a city will default on its debt, but it’s a relatively rare occurrence. In 2017, Puerto Rico filed for bankruptcy on $70 billion in debt, which is the largest public debt default in U.S. history.

Interest from muni bonds is also generally untaxed by the federal government, a bonus for investors.

Mortgage-backed bonds or mortgage-backed securities include individual mortgages that have been bundled into a bond. Mortgage bonds essentially allow fixed income investors to invest in the real estate market. The financial crisis notwithstanding, mortgage bonds have historically been a safe investment. They can be an opportunity for bond investors looking for high-yield income; interest rates for 30-year fixed-rate mortgages hovered around 7% in late 2022.

Pros and cons of investing in the bond market

The stock market and bond market represent the two main ways businesses raise cash, through equity or debt. Both stocks and bonds give investors and opportunity to collect recurring payments. In stocks, these are called dividends; with bonds, they’re coupons. However, with bonds, the purpose of investing is generally to collect the coupon, although investors will be paid back the principal of the bond when it reaches maturity. Some stocks pay dividends, but the price of a stock is generally much more volatile than it is with bonds, so stock investors usually get most of their return from price appreciation rather than dividends.

The bond market and stock market also influence each other. Higher interest rates tend to make bonds more attractive, pulling money out of the stock market and into bonds. The reverse is true in a low-rate environment.

Stocks in general are riskier than bonds, with more upside and downside, so they attract more risk-tolerant investors. Whether you choose to invest in stocks or bonds will likely be determined in part by your time horizon. Financial advisors often recommend a portfolio that shifts from stocks to bonds as the investor approaches retirement. Moving money from stocks to bonds also helps preserve capital, although you lose the opportunity for higher gains.

The bond market can offer valuable opportunities for investors looking for fixed income streams, and investors of any risk tolerance can find a bond that suits them, from Treasuries to junk bonds to emerging-market bonds.

It also gives corporations and governments a way of raising money. A number of companies prefer to raise money through the debt market rather than by selling new shares and diluting current shares.

Because bonds offer a fixed-income stream, they are popular with retirees and other investors with shorter time horizons. Although you may not choose to invest in bonds, every investor should understand the relationship between stocks, bonds, and interest rates.

Bonds make money for investors by paying a coupon, usually twice a year, based on the bond’s yield. The coupon is the stated interest rate paid on a bond. A 4% coupon on a $1,000 bond would pay an investor $40, or $20 twice a year. Investors will also get the principal repaid when the bond matures, but you’ll only make money on the bond that way if you bought it at a discount to its face value. That can happen if interest rates rise or if the government or company borrowing the debt is distressed.

The bond market facilitates the buying and selling of fixed-income debt securities. Buyers can purchase either new bond issues on the primary market or existing bonds on the secondary market. Corporations and governments can raise money through the debt market. The bond market gives investors the opportunity to invest in a wide range of debt markets, including corporate, government, municipal, mortgage-backed, and emerging markets.

Bonds range in safety from Treasuries, which are considered risk-free, to corporate junk bonds and emerging-market bonds, which are riskier but offer higher yields.

Overall, bonds tend to be safer than stocks. They also come with credit ratings that allow investors to choose the level of risk exposure that’s right for them.

Amazon To Lay Off 10,000 Employees This Week

Flasko (FLSK) Has The Potential To Surpass Polkadot (DOT) and…