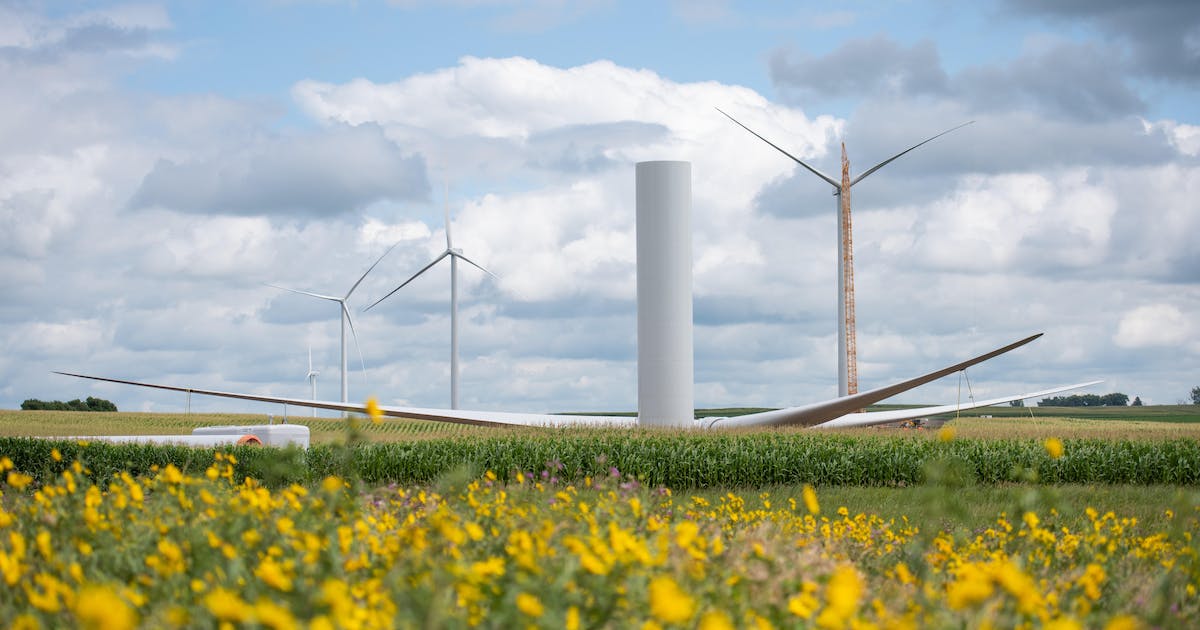 Renewable energy is proving as much an economic driver in Minnesota as an essential environmental pursuit. And even oil and gas producers who ship products to Minnesota and the huge Pine Bend refinery in Rosemount are reducing carbon emissions.

NextEra Energy Resources, the country’s largest wind developer, is building six wind farms to provide energy for Great River, Xcel and other power buyers. A University of Minnesota study concludes the company’s projects will provide $1.8 billion in economic benefit over 30 years, including up to 3,500 construction and other jobs.

“We have six projects in late-stage development or permitted and hope to have all constructed by 2024,” said David Gil, executive director of development for the Midwest.

Another sign of the industry’s worth? Quanta Services of Texas bought Blattner, the huge central Minnesota-based construction firm focused on wind energy, in the fall for a hefty $2.7 billion.

Quanta, an electric-power contractor, said it was looking for a fast-growing renewable partner to help it “collaborate with our customers to shape North America’s energy transition to a carbon-neutral economy.”

Blattner CEO Scott Blattner declined to comment last week, but has said in the past the company needed a larger partner with capital. The once-struggling Blattner did well with its 20-year focus on renewable energy. In 2020, Blattner posted operating earnings of $291 million on revenue of $2.4 billion, according to publicly held Quanta.

Businesses as well as environmental advocates contend we need to accelerate investments to meet carbon-cutting goals and mitigate the environmental damage of growing weather-related disasters.

Dan Juhl, 71, veteran of the state’s wind energy since the late 1970s, has sold several of his larger wind projects to ConEdison to focus on smaller, wind-solar hybrid projects in rural Minnesota. Juhl for years subsidized his incubating wind business by playing in rock bands.

“It feels great,” Juhl said of the economic growth of renewable energy. “When I started, the biggest windmill I could buy was about as big as my arm span. We had to work on the [government] policy, the technology, computerization and economies of scale.

“Now, solar drives our summer peak output and wind drives winter peak-power output. Minnesota used to import all our energy. The environment gets a free ride because [wind and solar] are so much cheaper than fossil fuels. Everybody is jumping on board.”

The cost of scaling wind and solar systems have declined by up to 90% since 2010.

Moreover, the drive toward renewable energy in Minnesota has created nearly 60,000 good-paying jobs, minus a blip in 2020 because of the pandemic, according to last year’s Clean Jobs Midwest report. The rate of growth was twice that of the overall state labor market, and Mast predicts 100,000 workers by 2030.

Moreover, there is growing acceptance by business, buoyed by growing public sentiment, that the economy must be powered by a low-carbon engine.

The Deloitte Economic Institute reported in January that inaction on climate change could cost the U.S. economy $14.5 trillion by 2070. Conversely, the report concluded that the U.S. would gain $3 trillion if it opts for carbon-reducing actions over the next 50 years.

“The analysis shows the battle to slow climate change is not only an aspirational goal, but an economic imperative for the U.S.,” said Alicia Rose, deputy CEO of Deloitte U.S.

Zero-carbon electricity, including renewables and nuclear energy, generated 55% of Minnesota electricity in 2020, up from 48% in 2019, according to the U.S. Energy Information Agency.

Minnesota regulators just approved Xcel Energy’s long-term plans, including increases in renewables and other alternatives. The utility plans to cut carbon dioxide, the main contributor to greenhouse gases that drive climate change, to zero by 2050.

With the completed energy projects, between 2005 and 2018, Minnesota curtailed imports of petroleum and coal, as it has increased renewables from 7 to 16% of total energy usage. Cleaner-burning natural gas rose from 20 to 27%, according to Minnesota Department of Commerce. Those trends are accelerating.

The Minnesota ethanol industry, a fuel supplement that also makes other products, accounts for 22,800 jobs and $6.1 billion in economic activity, according to Minnesota Biofuels Association and a 2020 University of Minnesota study.

Still, Minnesota is falling short of its goal to cut by 30% global-warming emissions from 2005 levels by 2025.

Transportation and buildings now loom as the biggest users of carbon-based energy and a significant opportunity.

In 2021, electric car sales more than doubled to 6.6 million, representing close to 9% of the global market, according to the International Energy Agency and Electrek.com. Europe and China led with 16 and 14%, respectively, followed by the U.S. at 4.5%. Minnesota accounted for 1% of electric-vehicle sales in 2020, according to the Metropolitan Council.

Minnesota, with cold winters and hot summers, consumes about 40% of total energy for commercial buildings and housing, according to Commerce.

The environmental challenge also presents economic opportunity through retrofits and next-generation building controls, sold by outfits such as 75F.

Gov. Tim Walz has proposed $900 million over the next two fiscal years to combat climate change, including to attract matching federal funds and more private investment.

“The clean-energy economy saves Minnesotans money, grows businesses … and makes Minnesota a healthier, safer place.” Walz said in a statement. “The time to act is now.”

A 2020 study by Cadmus, which researches energy, estimated the net economic impacts of Minnesota conservation ROI at $3.75 for every $1 invested between 2013-2018. That includes 48,000 local jobs added and $11 billion in related economic activity.

What does rising public debt mean for  the economy?

Brazil’s economic activity resumes growth in September, but below expectations