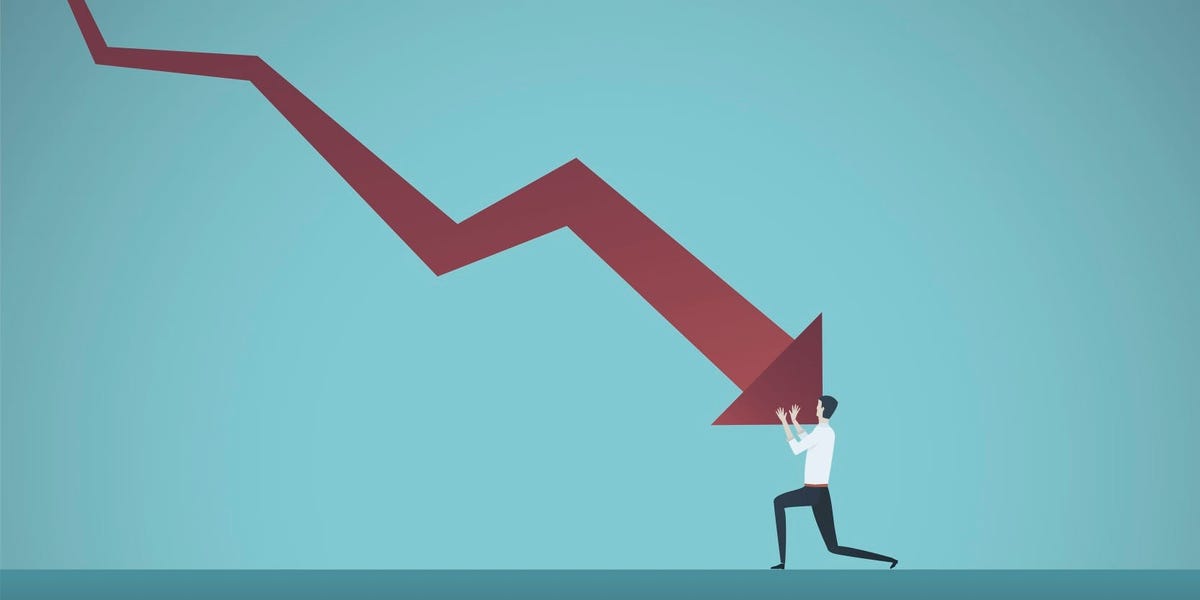 , but other signs show there’s none looming.

In the past few weeks, markets — especially tech and speculative stocks — have been rattled by signals of impending rate hikes from the US central bank. The Nasdaq is in a correction, the S&P 500 flirted with one, and the small-cap Russell 2000 is on the edge of a

, having dropped nearly 20% from its high.

Such declines indicate investors see the potential for a recession, an economic downturn not seen since the onset of the COVID-19 pandemic. But that’s a little dramatic, no?

“What the market is saying is pretty ominous,” Jefferies equity strategist Steven DeSanctis told Insider in an interview. “But what the data’s telling us is something a little bit more positive.”

Still, others on Wall Street have warned that fears of a recession, though not necessarily a recession itself, will grip markets later this year.

Earlier this month, analysts from Bank of America pointed to investors going into “recession panic” caused by a “rates shock” from the

tightening monetary. Star stock picker Cathie Wood said previously in an investor letter that the market is likely to be focused on the risk of a recession this year.

And billionaire hedge fund manager David Einhorn even warned outright that an actual recession is imminent. In a letter to investors Thursday, he said inflation, which is at its highest in 40 years, will cause a recession no matter what the Fed does.

In a January 23 note, DeSanctis acknowledged that investors are worried about it. “We think investors see an aggressive Fed pushing the US economy into a big slowdown or even a recession over the next year.”

But he also said there are no signs of a recession, or even a big slowdown, on the horizon.

A recession is defined by a prolonged contraction in gross domestic product. But the economy expanded 5.7% last year. In fact, growth accelerated in the fourth quarter to 6.9% from 2.3% in the third quarter, the Commerce Department said Thursday. And for 2022, it’s on track to grow 4%.

Even in the face of high inflation and the spread of the omicron variant, GDP has remained strong, DeSanctis said. And he highlighted other data points to back up his view.

High-yield spreads, what he dubbed as the “most important metric,” haven’t shown any troubling signs. And based on early earnings reports, companies haven’t seen much of a slowdown in their business prospects. On top of that, he said the US dollar hasn’t appreciated as much as it would in a normal recession.

“We’re not in the recession narrative at all,” DeSanctis said. Yet considering the Russell 2000 — an index of that’s more closely tied to the economy — has teased a bear market despite a lack of bad earnings reports, the market is “pricing in on a lot of bad news,” he said.

DeSanctis said such an over-reaction to a more hawkish Fed is nothing new. He cited December 2018 when stocks sharply declined after the central bank raised rates, as an example

“We have seen this play before,” he said. “And we know that we will get a bounce sooner rather than later.”

7 Stocks I Bought During This Week’s Stock Market Correction

7 Stocks I Bought During This Week's Stock Market Correction

AAG Partners With Simplex To Bring Fiat On-ramping To MetaOne®…..