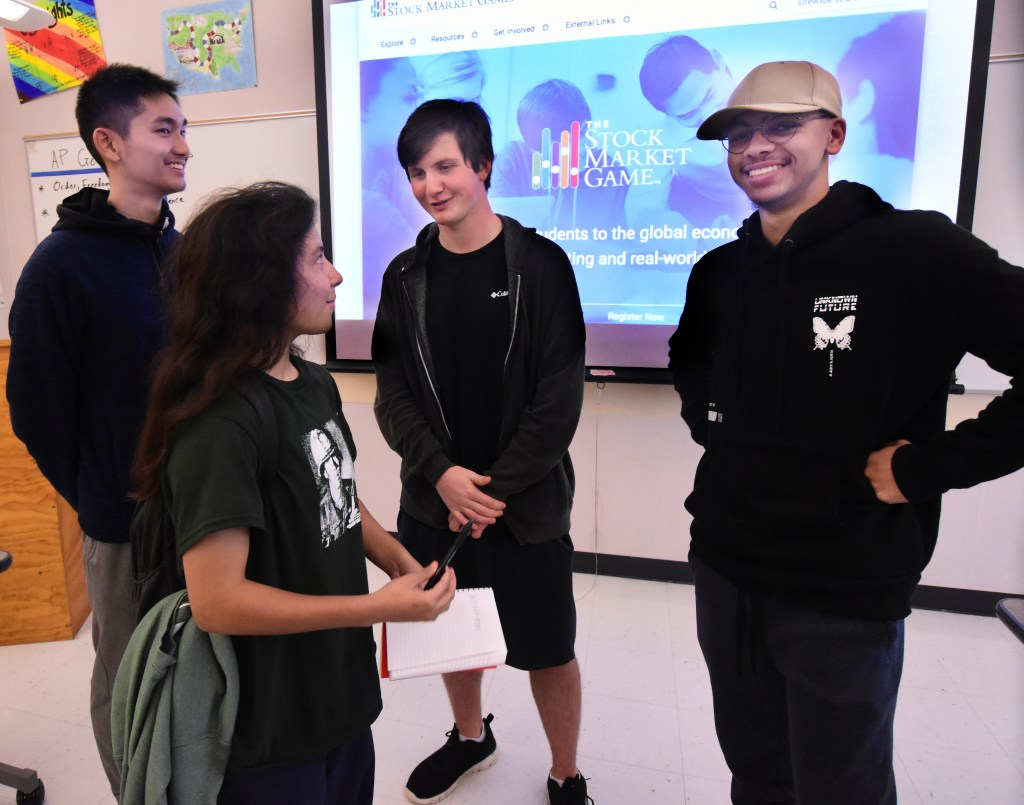 That was enough to beat about 4,500 other teams statewide, said Randall Baker, the students’ economics teacher. Baker said Terra Linda teams have been competing in the game for 13 years without a title.

“The fact that our TL student team took first place in such a competitive simulation is real cause for celebration — it is so hard to do,” said Jim Hogeboom, superintendent of San Rafael City Schools. “Many of these students have decided to pursue a career in business to build on their interest in economics, and we are so proud of them and the teacher, Randy Baker.”

The game, which tracks each team’s simulated portfolio, trades and earnings online, is supplied by a foundation run by the Securities Industry/Financial Market Association, or SIFMA.

“These guys were looking at all the other high schools in the state to see how far they had to go to get No. 1,” Baker said. “They didn’t see the portfolios, they just saw the total amount.”

During each weekly class, Baker said, he asked the team to make one trade. He supplied them with links to reports and other research to help them make their decisions.

The team members said the keys to their win were timing, monitoring the market on a daily basis, reading global news reports and doing exhaustive research. In addition to keeping tabs on the New York Stock Exchange and NASDAQ, the students also read annual, half-year and quarterly earnings reports on the different companies.

Gutierrez, 17, said she enjoyed the experience and would like to continue investing. Both she and Huang said the teamwork was the key element.

“The most fun thing was working as a group and seeing what stocks to invest in,” said Huang, 18.

Sumner, 17, said he learned the most while doing the research, particularly on how to use company earnings reports to make investment decisions.

“We were looking at the undervalued stocks that we thought might go up,” he said. “We looked at their quarterly reports.”

Spinozzi said he plans to pursue a career in finance.

“I want to do private equity or investment banking,” he said. “They’re very lucrative careers.”

“It’s real-world knowledge that they will need when they leave high school,” Baker said.

According to the SIFMA Foundation, the Stock Market Game is designed to help students learn first-hand the value of long-term investing while also boosting their math, economics and personal finance knowledge. The game has been operating since 1977.

“It’s an honor to partner with local schools to provide resources that equip young people in our communities with the critically important skills they need to succeed in their careers and family lives,” said Melanie Mortimer, president of the SIFMA Foundation.

Japan’s FSA Thinks Crypto Should Be Treated Like Banks