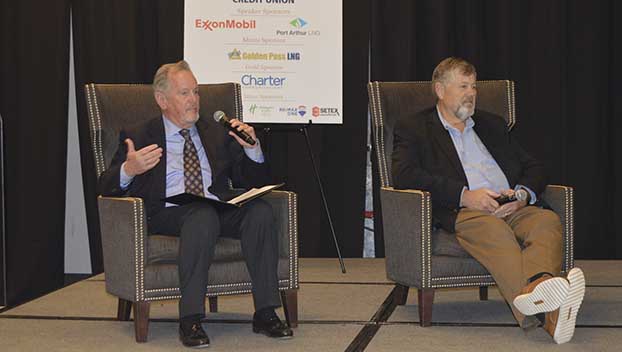 BEAUMONT — Leaders from local and area counties recently gave their thoughts on the economy as well as listing major issues they’d like to see addressed during the legislative session.

Jefferson County Commissioner Vernon Pierce would like a stop to unfunded mandates as well as some help from school districts in attracting big business to the area.

Municipalities are able to offer abatements to help lure business to the area, and school districts were only able to sweeten the pot with what is called the Chapter 313 program. School districts are not allowed to give the same tax breaks as a city or county but are able to under the special program as a way to attract jobs and investment. 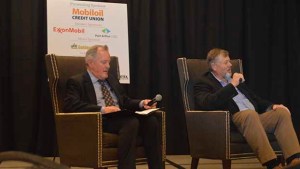 Another wish on his list is related to the legislative session is assistance with the jail population. The jail is currently over capacity but the county is not allowed to transfer prisoners, he said.

When thinking of the county he sees great industry, infrastructure, rail, highways, Lamar institute of Technology and the things that bring people here.

There’s something else of importance, the citizens.

“We forget that sometimes because we think of all the material things and not the other things,” Pierce said. “Industry’s told us many times: they’ve been to other places and they don’t want them. They come here and they’re always welcome.” 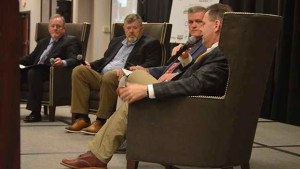 Pierce spoke of the importance of the area and of proposed and current projects in Jefferson County. 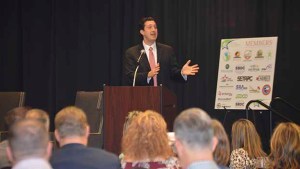 For Jefferson County, the biggest economic development is the deepening of the Sabine Neches Waterway, he said.

“This is 20 years in the making and now we’ve started the first increment, building a turning basin,” Pierce said. “We are going to try to get bonds floated so that we can finance it. I think that will be a huge deal for economic development and allow industry to have larger ships so they can bring more product to market.”

Then there’s the 11,000 acres of land on the river that is up for development on Jefferson and Orange County sides.

Other projects include the ExxonMobil expansion, construction of the OCI Beaumont facility and more.

Orange County Commissioner Johnny Trahan also knows the importance of the Chapter 313 agreements between school districts and industry, especially with the proximity of the county with the state of Louisiana.

“We’re constantly in competition with them,” Trahan said of Louisiana.

Trahan knows people get tired of transportation construction but a little help with the funding for this could expedite some of the permitting, he said.

Like Jefferson County, Orange County is seeking major expansion and other projects that will boost the economy.

Orange County is the setting for the multi-billion dollar expansion of Chevron Phillips.

“It seems we’ve been talking about it the last 20 years, hit and miss, hit and miss. It finally got announced and was probably the worst kept secret in Southeast Texas,” Trahan said. “We watched them do their lane improvement project. It wasn’t site prep, it was lane improvement. We’ve been seeing the impact of it already.”

Along with the $8.5 billion plant comes an influx of housing — 1,300 home starts he said, adding he’s never seen anything close to this occur.

And years with a lack of an emergency room and hospital will be over this year with the constriction of a new facility.

And these were a few of the upcoming projects in the county.

In his parting words, Trahan noted with gratitude the assistance received from Speaker of the Texas House Dade Phelan and also hoped Phelan can assist with other issues the county is dealing with.

The main issue is the rules for qualifications for assistance with flooding infrastructure. Trahan would like to see the rules changed so Orange County can qualify for funding.

“And especially on rural counties, and I consider Orange County a rural county. It makes it really hard. It’s almost as if the rules were made for metropolitan areas, and we need to make a few changes to what we have so we qualify for more of that funding,” Trahan said.
“But there’s a lot of good things going on and to reiterate, Speaker Phelan does a wonderful job getting some funding for Lamar State College Orange. They’re doing a great job getting folks ready to go to work in all these plants that we have coming up,” he said.

Kelly Prasser, director of external affairs for Sempra Infrastructure and Port Arthur LNG, offered Thompson a little help with his predictions early into the event, saying “we’ve got a little project called Port Arthur LNG down on Highway 87” expected to employ 5,000 construction workers, 200 permanent jobs and the company is working with Entergy to build more resiliency at the project and look at some green options.”

Dropout Learns How To Print Fake Money Through Youtube; Nabbed With Hundreds Of Counterfeits