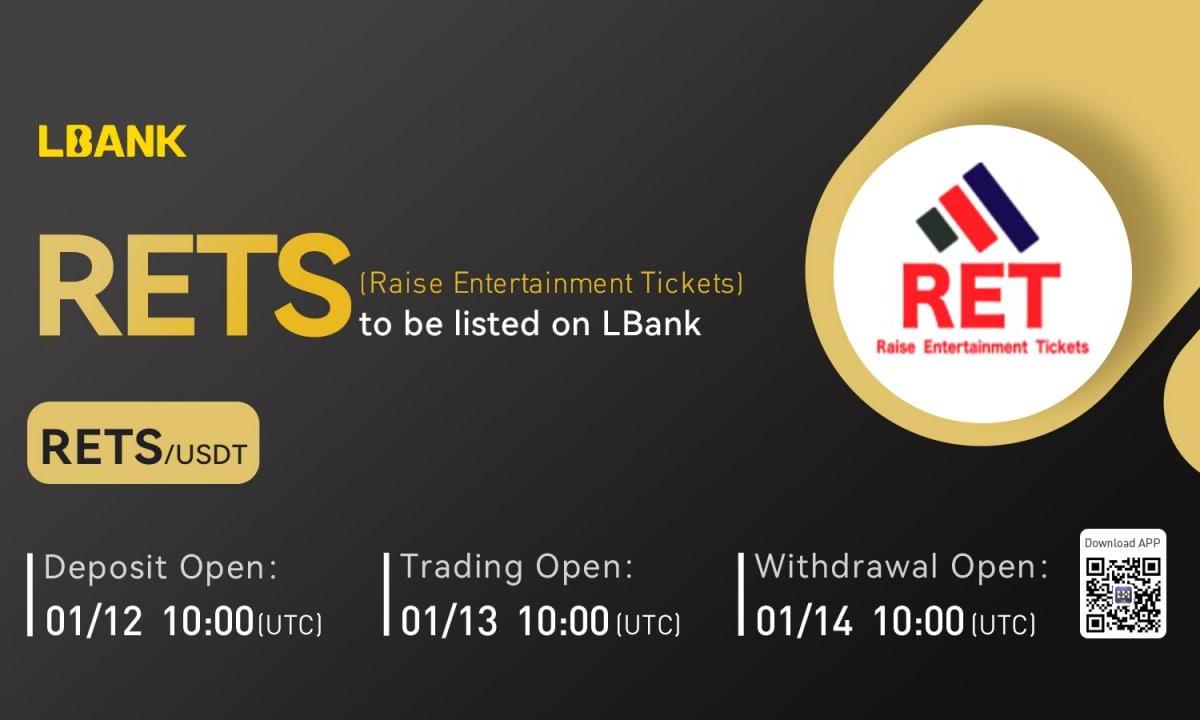 As a comprehensive platform that provides various entertainment contents such as blockchain games, Raise Entertainment Tickets (RETS) Project plans to conquer the global game entertainment market by focusing on “marketing” as much as possible. Its native token RETS will be listed on LBank Exchange at 10:00 UTC on January 13, 2023, to further expand its global reach and help it achieve its vision.

Introducing RET Project
RET Project is a comprehensive platform that provides various entertainment contents such as blockchain games. Blockchain games, which feature “making weapons and items that have been acquired for a long time available for trading” are slowly becoming known to the public, but there are no big hits yet, because they do not put much effort into marketing. However, RET Project puts the greatest effort into marketing. In order to focus on this, it will provide a platform that includes games and video content all over the world.

In platforms partnered with the RET Project, it will be able to billing using RETS tokens issued by the Project by building all content on the blockchain. The partner platform was released in August 2020 and had 30 titles of game content at the time of release. They will gradually become dApps and each content item will be created as an NFT token. Once converted to dApps, users will be able to buy items using RETS tokens, and demand for RETS tokens will increase in proportion to the increase in users.

There’re also partners of RET Project who will provide AR games, services for attracting and advertising, which is made possible by the projection of celebrities and popular characters in major cities and tourist attractions around the world. Based on blockchain technology, RET Project is building a system that rewards users who invent unique AR use case ideas with RETS tokens. When an idea is adopted, a unique token is issued, which serves as proof of ownership of the idea. Users can sell this ownership in the market, which in turn serves to promote liquidity in the RETS. In addition to AR, by linking VR devices with the platform, RET Project can also provide VR gaming, reality experience, and unreality experience such as space travel.

RET Project will provide SNS community, media content, and a market where users can trade items and content. Furthermore, RET Project will bring the world’s major cities into high-definition 3D virtual worlds. In this virtual city, users can design their own original building, house, or other types of construction, and if they get high ratings from other users, the users who designed get high rewards. Users can sell or lend their estate or construction they own, and RETS is used to pay for it. Advertisements such as signboards can also be posted, and RETS is used to pay for advertising fees.

The goal of RET Project is to provide a comprehensive entertainment platform to people all over the world beyond the nation border. It plans to conquer the global game entertainment market by focusing on “marketing” as much as possible.

About RETS Token
RETS is the native token of RET Project. Within each partner platform, RETS will be used to purchase currency within the platform. It will also be the currency for content prizes and rewards. Ultimately, RETS aims to grow in the future as a utility coin that can be used for multiple platforms, and become a coin that is commonly used for a wide range of entertainment content, including games, video and music viewing, social networking communities, various media, NFT, and metaverses.

About LBank
LBank is one of the top crypto exchanges, established in 2015. It offers specialized financial derivatives, expert asset management services, and safe crypto trading to its users. The platform holds over 7 million users from more than 210 regions across the world. LBank is a cutting-edge growing platform that ensures the integrity of users’ funds and aims to contribute the global adoption of cryptocurrencies.

Why Japan Is Rearming Again

sensex today: Stock Market Highlights: Nifty forms bearish candles for 3 days in a row. What traders should do on Friday