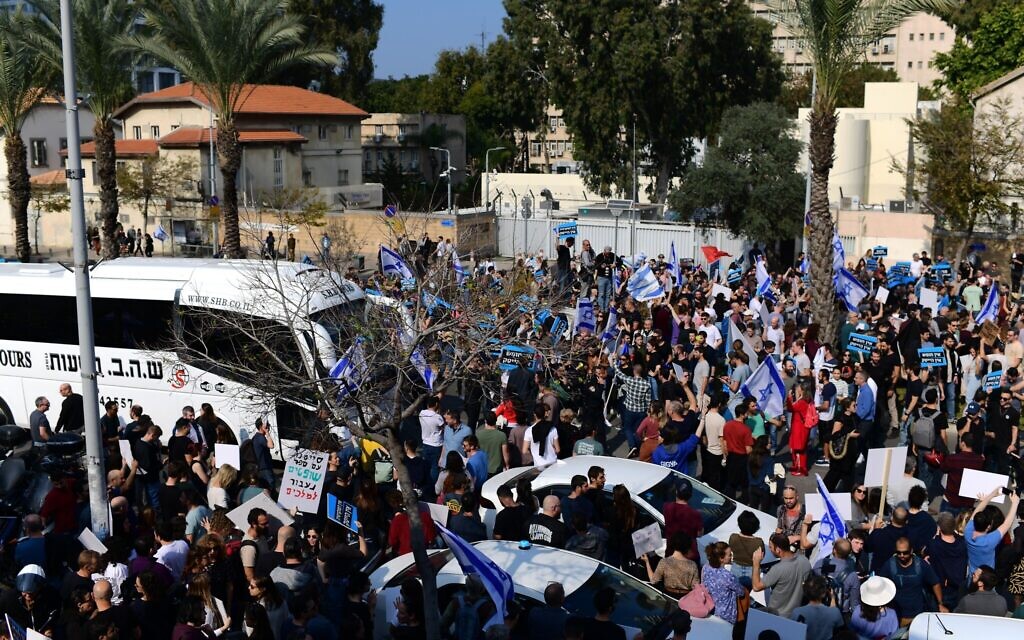 Joining a wave of protests, hundreds of Israeli economists published an “emergency letter” on Wednesday warning that the far-reaching judicial shakeup being advanced by Prime Minister Benjamin Netanyahu’s new government could have grave implications for the economy.

“The concentration of vast political power in the hands of the ruling group without strong checks and balances could cripple the country’s economy,” the signatories cautioned.

Their warning came the day after Bank of Israel Governor Amir Yaron reportedly outlined for Netanyahu the potential consequences of the proposed judicial overhaul and relayed warnings made by senior economic figures and officials from credit rating firms during his recent meetings at the World Economic Forum in Davos.

Amid warnings that the ruling coalition’s plans to upend the judiciary could scare away investors and negatively impact the country’s credit rating, Yaron explicitly told Netanyahu that the shakeup would harm the economy, the Kan public broadcaster and Channel 12 news reported.

In their Wednesday letter, the economists warned that the radical measures, which experts say would eliminate the system of checks and balances undergirding Israel’s democratic institutions, could lead to reduced investments in the booming local tech industry, one of the most reliable engines of economic growth.

Eugene Kandel, then the head of the National Economic Council, attends a press conference in Jerusalem on June 25, 2014. (Miriam Alster/FLASH90)

They also invoked the risk of a “brain drain” and the relocation from Israel of research and development centers, as well as the danger of a reduction in the country’s credit rating.

Netanyahu’s meeting with Yaron came hours after hundreds of tech workers held an hour-long strike to protest the planned changes.

On Sunday, senior Bank of Israel official Prof. Moshe Hazan resigned, saying he couldn’t stay at his job “while Israeli democracy is in danger” and that he planned to take an active role in the protests against the judicial overhaul plans.

And a day earlier, former Bank of Israel governors Karnit Flug and Jacob Frenkel warned in a joint op-ed that the government’s plans for a sweeping overhaul of the country’s judiciary could negatively affect Israel’s credit rating and “deal a severe blow to the economy and its citizens.”

“The weakening of the judiciary system (…) is expected to lead to a decrease in the willingness of foreign investors to invest in Israel, and an increase in the cost of raising funds for the Israeli government as a result of a possible downgrading in the country’s credit rating,” Flug and Frenkel explained.

The credit rating agency Standard & Poor’s (S&P) said earlier this month that the judicial makeover plans, as well as the new government’s hardline policies in the West Bank, could negatively affect the country’s rating.

As presented by Justice Minister Yariv Levin, the coalition’s proposals would severely restrict the High Court’s capacity to strike down laws and government decisions, with an “override clause” enabling the Knesset to re-legislate struck-down laws with a bare majority of 61; give the government complete control over the selection of judges; prevent the court from using a test of “reasonableness” to judge legislation and government decisions; and allow ministers to appoint their own legal advisers, instead of getting counsel from advisers operating under the aegis of the Justice Ministry.

We’re really pleased that you’ve read X Times of Israel articles in the past month.

That’s why we started the Times of Israel ten years ago – to provide discerning readers like you with must-read coverage of Israel and the Jewish world.

So now we have a request. Unlike other news outlets, we haven’t put up a paywall. But as the journalism we do is costly, we invite readers for whom The Times of Israel has become important to help support our work by joining The Times of Israel Community.

For as little as $6 a month you can help support our quality journalism while enjoying The Times of Israel AD-FREE, as well as accessing exclusive content available only to Times of Israel Community members.

Thank you,
David Horovitz, Founding Editor of The Times of Israel

Already a member? Sign in to stop seeing this

How a potential recession will uniquely affect the creator economy