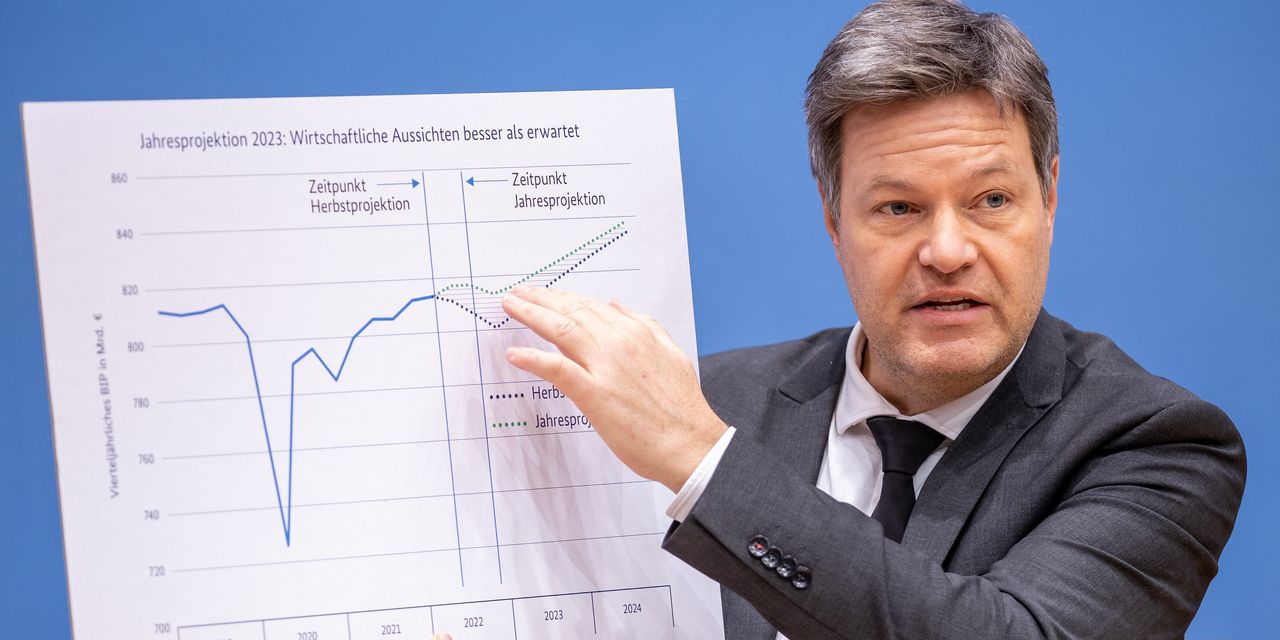 FRANKFURT—The German economy will grow this year and might even avoid a shallow recession in the short term, the government said on Wednesday, the latest sign of brightening growth prospects in Europe despite the shock of Russia’s invasion of Ukraine.

Europe’s largest economy is likely to expand by 0.2% this year, the German Economy Ministry said Wednesday in its annual economic report, revising up an autumn forecast for a 0.4% contraction.

The revision marks a turnaround for Europe’s largest economy months after some economists warned it could face its deepest slump since World War II.

“We aren’t through yet but we managed to avoid the worst scenarios,” German Economy Minister

said, recalling that some scenarios saw a possible 12% contraction in output following Russia’s attack on Ukraine and the energy crunch it caused.

Mr. Habeck said the recession his ministry had anticipated for the end of last year and the first quarter of this year “will be shorter and milder if it takes place at all.”

A steep rise in energy prices after the invasion and Russia’s decision to all but stop supplying Europe with natural gas after the summer sparked fear that German authorities would have to ration the fuel during the winter, shutting down swaths of its industry.

But a warm winter so far, heavy government spending to shield businesses and households from high prices and energy-saving measures helped to blunt the blow.

The latter helped push the nation’s gas reserves toward record-high levels in recent months, in turn helping to lower energy prices and bolster consumer and business confidence. Across the European Union, gas storage is at its highest-ever level for this time of year, according to Jim Reid, a strategist at Deutsche Bank.

“Even if we revert to persistent cold weather this and next winter, storage levels should be adequate to get through next winter as well,” Mr. Reid said.

Germany’s large export-oriented manufacturers have kept production steady in recent months, defying predictions of a sharp decline, and now stand to benefit from the economic reopening in China, Germany’s largest trading partner. Mounting confidence about the year ahead helped send a closely watched business sentiment index to its highest level since last summer on Wednesday.

Still, while a crisis may have been averted, Germany faces significant economic headwinds that suggest a lengthy period of low growth is likely.

A resurgent euro and a likely slowdown in economies such as the U.S. looks set to sap demand for the country’s exports. Industrial orders have weakened since the start of 2022. German exports to countries outside the EU declined by almost 10% in December from the previous month, according to its federal statistics agency.

The German government rolled out spending packages totaling some 8% of gross domestic product last year to support households and businesses, according to ING. But although it has recovered somewhat in the past few months, German consumer confidence remains close to historic lows, with elevated energy prices continuing to weigh on households’ purchasing power. Germany’s retail sector has been selling less, in price-adjusted terms, since last spring, according to data from

“A recession may well be avoided, but we think the economy will at best flatline in the first half of 2023 and only grow very slowly thereafter,” said Franziska Palmas, an economist with Capital Economics.

Meanwhile, the European Central Bank is likely to increase interest rates by at least another percentage point over the coming months to curb high inflation, starting next week. That will push up mortgage and other borrowing costs, likely affecting spending and growth later in the year. Gas prices will also remain much higher in Europe than elsewhere, analysts say, weighing on the competitiveness of the continent’s energy-intensive manufacturers.

Germany’s economy only returned to its prepandemic size in the third quarter of 2022, and industrial production is still some 5% below what it was before Covid-19, said

an economist at ING. It faces deep structural challenges, including a costly shift toward renewable energy sources, changes to global supply chains and an increasing shortage of skilled workers, he said.

“Even if managed in the most optimal way, it will take a few years before the economy can actually thrive again,” Mr. Brzeski said.

Market Analysts Say These Crypto Projects Will Thrive in 2023:…

Level the noise: Surviving and thriving in an unsteady economy