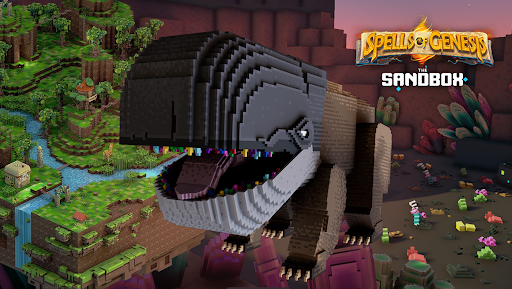 Spells of Genesis creator EverdreamSoft is selling off a prime chunk of digital real estate in The Sandbox metaverse, together with a collection of exclusive NFTs that memorialize some of the biggest names in crypto.

The Premium LAND sale will see EverdreamSoft auction off a highly prized parcel of LAND adjoining its 6×6 EverdreamSoft Estate within The Sandbox, which is a popular virtual world, or metaverse, where players can build, own, and monetize their gaming experiences on the Ethereum blockchain.

Players within The Sandbox are free to explore its 3D landscape and buy LAND within it, which allows them to create and animate 3D objects such as characters, animals, buildings, vehicles and more. Once those objects have been built, they can then be imported into The Sandbox marketplace and minted as NFT assets. In addition, users can monetize their LAND by charging visitors an entrance fee or by hosting events.

The EverdreamSoft Estate enjoys a prime location within The Sandbox, located next to popular social hubs and top-rated partners in the metaverse such as Apes of Space, Blackpool, eToro and Mad Mecha. As such, the LAND it’s selling is considered to be “Premium LAND” because its proximity to those attractions means it should see much higher than normal levels of traffic, presenting a huge opportunity for buyers who’re prepared to invest in the space.

EverdreamSoft said the LAND will become even more enticing as it’s planning to build a Social Hub on one of its existing plots in collaboration with Nabiya Studio, a top metaverse games developer. The hub, which is likely to drive yet more traffic to the location, is intended to serve as a link between The Sandbox and EverdreamSoft’s popular Spells of Genesis fantasy game, where it will be possible to meet and interact with its most popular characters.

“EverdreamSoft’s land will allow Spells of Genesis’ iconic world to expand into an exciting 3D metaverse,” said EverdreamSoft founder and Chief Executive Shaban Shaame. “The collaboration with Sandbox will push the world of Spells of Genesis to a fascinating new dimension.”

Whoever acquires the LAND will not only have space available to build a number of interesting buildings or other creations, but also acquire a collection of exclusive NFTs currently owned by EverdreamSoft and its neighbors in The Sandbox. These include the BearWhale NFT, which depicts a legendary trader from Bitcoin’s early days who is believed to have depressed the entire market throughout 2014 with his massive BTC holdings. Other NFTs will have themes around “Satoshi, Creator of Blockchain” and “Sir of Ether”.

EverdreamSoft said its Premium LAND will go up for auction on February 10, and that the winning bidder will become full owner of both the LAND and the NFTs, with the freedom to develop them as they see fit or sell them onto a third party.