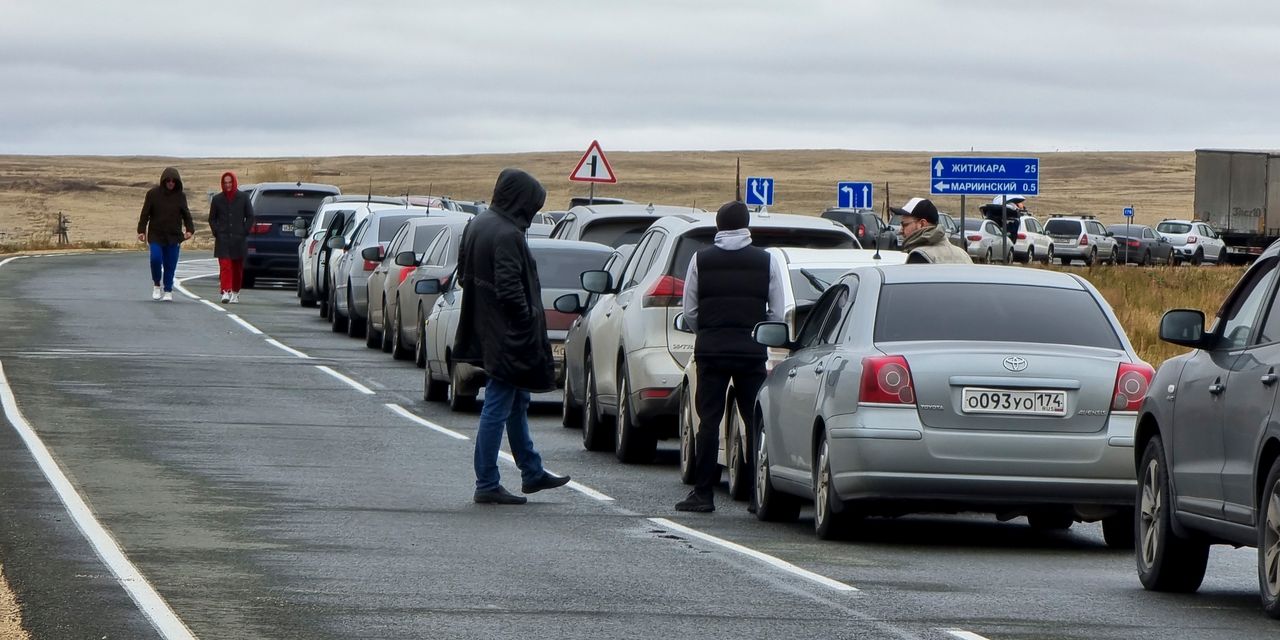 ‘s order to mobilize 300,000 men made businesses and consumers cautious about spending, at least temporarily, as they watched employees leave for the military or to the borders to escape the draft.

Dmitry Sizon, the co-founder and chief technology officer of Russia-based software company MarketGuru.io, said business slowed dramatically at the time. “People weren’t working. They were either on the road, or in the four-day traffic jam at the Georgia border, or they were in the office, listening to the girls in the office cry,” Mr. Sizon said about the first few days after the mobilization order was announced.

About a quarter of the company’s tech team has left the country since the mobilization announcement and are working remotely, he said. MarketGuru.io company sells analytics software to independent sellers on online marketplaces such as Wildberries, an

MarketGuru.io, which is based in the southern Russian city of Taganrog, only about 30 miles from the Ukrainian border, said sales initially dropped but promotions helped business rebound.

“There are clients who changed their minds because they are afraid, afraid of what tomorrow will bring,” he said.

A survey by Russian human-resources company Ventra that was conducted in September, right before the mobilization announcement, found that 25% of IT workers in Russia were considering leaving the country and that 6% had already done so this year. A similar finding came from a survey over the summer by the Russian Association for Electronic Communications, where 21% of responders said they were considering relocation.

Nikolay Komlev, director of Russia’s Information & Computer Technologies Industry Association, said that roughly two to three times more IT workers left Russia after the mobilization order than in the first wave of departures in the spring. The workers left despite government assurances that tech workers wouldn’t be included in the mobilization. The government has since said that it has called up its target number of draftees.

The tech sector represented just under 6% of gross domestic product, but was one of the fastest-growing parts of the economy before the war, according to economists at Bryansk State Technical University. It produced relatively high-wage jobs that connected Russian workers with Western companies, often directly or through technology outsourcing contracts. The exodus is both a financial hit and another example of how Russia’s economy has turned inward.

The Russian central bank said at the end of October that the economy would contract between 3% and 3.5% this year. That would be the deepest recession of any large economy in the world this year.

Johannes Wachs, an assistant professor at the Vienna University of Economics and Business, quantified the brain drain among Russian developers. He geolocated Russian developers’ accounts on GitHub, a software platform where developers collaborate.

Can Russia’s IT industry survive Putin’s leadership? Why or why not? Join the conversation below.

“I would estimate that around one in five developers is now elsewhere,” Prof. Wachs said.

The economic impact of the departures will hit the government budget, which had already been running a deficit due to the costs of the war and increased social spending, coupled by a decline in energy prices.

Russia’s working population was already declining and the departures will hurt consumer spending, said Sergey Zhavoronkov, a Russian economist and board member at the Liberal Mission Foundation. Now, he said, some people are getting drafted, some are emigrating and some are trying to hide from the draft in the informal cash economy: “The tax burden is rising on the remaining workforce.”

In February, ride-sharing startup inDrive, based in Mountain View, Calif., had about 1,200 employees in Moscow and the Siberian city of Yakutsk, where the company was founded.

“We’ll have zero by the end of the year,” said inDrive Chief Executive Arsen Tomsky.

The company had already relocated about 800 employees, mostly to Kazakhstan and Cyprus, before the mobilization. That sped up inDrive’s plans to move the remaining workers, Mr. Tomsky said. Those who don’t want to relocate will be laid off, he said.

“People are in danger,” Mr. Tomsky said, referring to the threat that employees would be called up and the risk of broader internal instability in the country. “It’s better to be outside of Russia.”

For Mr. Tomsky, who invested in technology, arts and environmental sustainability in his native region of Yakutia, the situation is heartbreaking.

“The local economy is heavily dependent on oil and gas,” he said. “I tried to convince everyone that we must make a bet on the intellectual sphere…That has become difficult and impossible.”

can I take advantage of the Nasdaq correction?

Theme For 2022, Quotes To Bring Awareness And Hope

What Does The Second Richest Person Own?