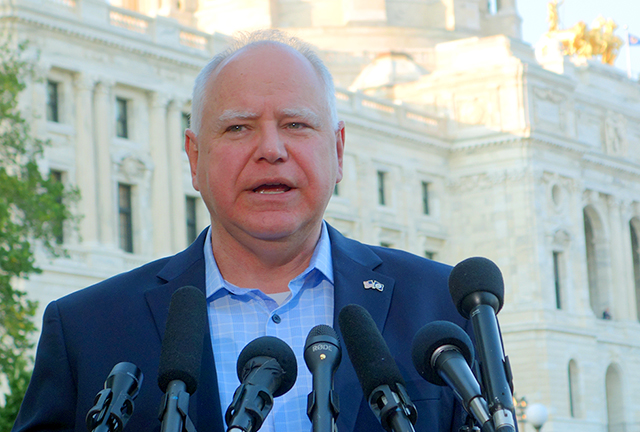 COVID, crime and the economy loom at the top voting issues for Minnesotans in a new SurveyUSA poll from KSTP news.

That survey, conducted from Jan. 25 to Jan. 30, indicates Gov. Tim Walz faces the prospect of a competitive race for reelection against any one of several possible Republican opponents.

The poll’s credibility level of responses for its 690 adults is plus or minus 3.3 percent, for its 592 registered voters plus or minus 4.8 percent and for its 501 likely voters plus or minus 5.7 percent. SurveyUSA’s methods receive an “A” grade from Nate Silver’s 538 analysis site. The site has found no detectable bias toward Democrats and Republicans in the pollster’s surveys.

How is Walz faring with Minnesotans?  It depends on which question you ask and to whom you ask it. His reelection number among registered voters is a healthy 52 percent, but his personal approval among likely voters slumps to 45 percent. That may suggest that the 2022 Minnesota electorate will not be so Walz friendly.

Walz, however, fares better in the survey than does President Biden. Biden’s job approval among registered voters is only 41 percent. A mere 36 percent of that group approve of Biden’s performance on the economy and just 40 percent of adults approve of Biden’s COVID management. Walz’s approval on economic performance is 49 percent among registered voters and 49 percent among adults on addressing COVID.

These are middling numbers for Walz, indicating the right Republican challenger could make the governor’s race a competitive one. In match races with six GOP gubernatorial candidates – not including Rich Stanek, who declared after the polling concluded – Walz received between 42 and 45 percent support, with leads of between three and eight points. Physician and former State Sen. Scott Jensen, who recently won the Republican caucus straw poll, only trails Walz 43 to 40 percent. Jensen declared the earliest and has raised the most money among the GOP gubernatorial candidates, but his skepticism of COVID vaccines might work against him in a statewide race. Seventy percent of adults in the survey are vaccinated and a previous KSTP poll revealed that 54 percent of Minnesota adults favored the Biden administration’s vaccination mandate for all businesses with at least 100 workers.

The key tea leaves for the future of the 2022 Minnesota elections appear in the survey responses of the two groups that determine statewide elections – political independents (29 percent of the survey sample) and suburbanites (45 percent of the sample). The likely voters in both groups rate crime as a higher priority in their voting than do other voters. Twenty-six percent of independents and 19 percent of suburbanites rate crime as a top voting issue, compared to only 16 percent of the sample as a whole. GOP candidates are already emphasizing this issue and it is a top agenda item of Republican state legislators in this year’s legislative session.

Overall, though, Walz leads in match races against the GOP candidates among independents and suburban residents. His leads in the suburbs tack closely with his leads among all likely voters and are even a bit larger among independents, among whom a higher proportion are undecided.

The preponderance of poll evidence, then, suggests that 45 percent personal approval probably catches Walz’s standing with the likely Minnesota electorate better than his 52 percent job approval among registered voters. He steadily received 40-45 percent in match races against potential opponents and his economy and COVID approval percentages are also just below 50 percent.

Here is the big question: Can the GOP make this a competitive race? For that to happen, they must accomplish three major tasks. First, they must reduce the great financial advantage the DFL and Walz now have in campaign funds. Second, they must nominate a quality candidate with wide appeal. Third, they must run a campaign that persuades Minnesotans that Republican solutions to their top concerns deserve their vote.  They have not succeeded at these tasks in a statewide race since 2006. Will they this time?

Steven Schier is the emeritus Congdon professor of Political Science at Carleton College in Northfield.

Want to add your voice?

If you’re interested in joining the discussion, add your voice to the Comment section below — or consider writing a letter or a longer-form Community Voices commentary. (For more information about Community Voices, see our Submission Guidelines.)

MinnPost’s in-depth, independent news is free for all to access — no paywall or subscriptions. Will you help us keep it this way by supporting our nonprofit newsroom with a tax-deductible donation today?

Avalanche’s TVL Is Now Over $10 Billion

Avalanche's TVL Is Now Over $10 Billion

Will Semiconductor Stocks Send a Trick or Treat Message to Tech Sector?