China Economy Starts the Year With a Wobble 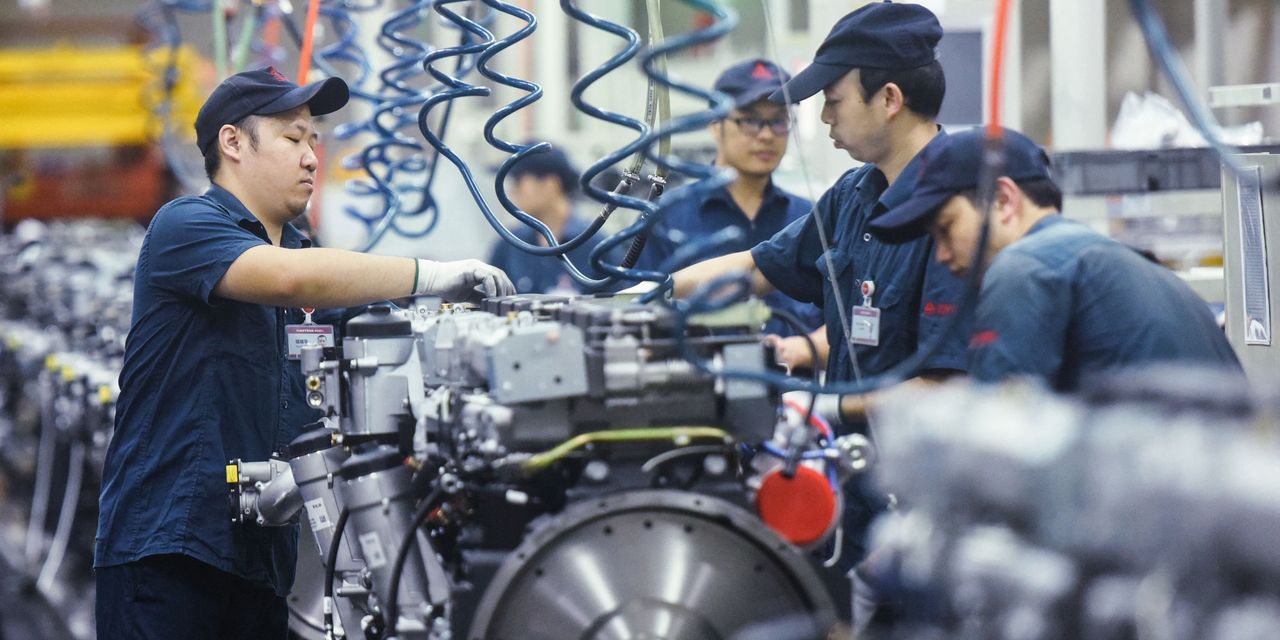 The Chinese economy started the year on an uncertain footing, as Covid-19 flare-ups disrupted factory activity and consumer spending, according to a trio of manufacturing and service sector surveys released Sunday.

Two gauges of Chinese manufacturing activity—one official and one private—each retreated in January, while a third measure, of the country’s services sector, brought into relief the deep toll that the latest burst of coronavirus infections has inflicted on domestic demand.

China’s official manufacturing purchasing managers index fell to 50.1 in January, the National Bureau of Statistics said, down from 50.3 in December and just above the 50 mark that separates activity expansion from contraction.

The result was in line with the median forecast among economists polled by The Wall Street Journal and marked the third straight month that the measure was in expansionary territory.

However, the subindex measuring total new orders fell deeper into contraction, dropping to 49.3 in January, while new export orders improved to 48.4 in January—still in contractionary territory. Factory production in January weakened to 50.9 and would likely have been even softer if not for an acceleration in the production of consumer goods ahead of the Lunar New Year holiday that begins on Feb. 1, the statistics bureau said.

Meanwhile, the Caixin China manufacturing PMI, a private gauge that is more focused on small private businesses than the official manufacturing index—which is weighted more toward large state-owned enterprises—tumbled to 49.1 in January, its lowest level since February 2020, at the height of the initial Covid-19 outbreak in China.

The steep drop in the Caixin manufacturing PMI, from a reading of 50.9 in December, came as the subindexes for output and total new orders dropped to their lowest levels since August, Caixin said.

Overseas demand also contracted at a faster-than-usual clip, as the rapid spread of the Omicron variant of the coronavirus dampened global consumer sentiment.

The subdued demand prompted manufacturers to slow their pace of hiring in January to keep costs down, Caixin’s employment subindex showed.

“This year, policy makers should make stability their focus,” said Wang Zhe, an economist at Caixin Insight Group, in a press release accompanying the release of the data Sunday.

Separate data on China’s services sector, also released Sunday by China’s statistics bureau, showed renewed weakness in a section of the economy that has lagged behind the broader pandemic recovery for nearly two years.

While China’s leaders have emphasized the importance of orienting China’s economy more toward domestic consumption, that effort has repeatedly been hindered by new Covid outbreaks and the government’s strict measures to contain them.

China’s official nonmanufacturing PMI, which includes both services and construction activity, fell to 51.1 in January from December’s 52.7, the statistics bureau said Sunday.

The subindex measuring services activity dropped to 50.3 in January, the lowest level in five months, from December’s 52.0, dragged down by coronavirus outbreaks across the country.

Subindexes tracking sectors of the economy requiring close human contact, including hotel and consumer services, plummeted below 45, reflecting a lower willingness to spend among consumers, said

The subindex measuring construction activity also weakened to 55.4 in January, from 56.3 the previous month, as weather conditions and the homeward journeys of construction workers for the Lunar New Year festival took their toll, the statistics bureau said.

The economic data releases provide the first glimpse this year into the health of the world’s second-largest economy, which quickly lost momentum in the final months of 2021.

For the full year last year, China reported an 8.1% gross domestic product expansion compared with the prior year, but the growth profile was lopsided. In the third and fourth quarters, year-over-year GDP growth was 4.9% and 4.0%, respectively—lower than China’s pre-Covid growth trajectory.

Late last year, China’s leaders began signaling a shift toward promoting stability rather than the structural reforms and disciplines that they unleashed on a number of key engines of economic growth, including the real-estate, technology and private-education sectors.

China’s central bank lowered its benchmark lending rates twice, in December and January, while freeing up for lending a large sum of funds that it had required banks to keep in reserve. Authorities have also recently encouraged banks to extend more home loans and made it easier for cash-strapped property developers to unload distressed assets.

However, Sunday’s release of relatively weak PMI figures “indicate the policy easing measures from the government have not yet been passed to the real economy,” Zhang Zhiwei, an economist at Pinpoint Asset Management, wrote in a note.

Mr. Zhang said the pandemic, combined with the property sector slump, remained the main risks for the Chinese economy. He predicted that the government would further increase policy support in the coming months, particularly through increased fiscal spending.

More broadly, economists widely expect Beijing to roll out more easing measures as leaders give priority to stability in a politically important year when Chinese leader

will almost certainly seek and secure a third term in power.

Across China, provincial and regional governments have set economic targets for 2022 that are roughly in line with last year’s growth rates, despite the increased headwinds that the economy now faces.

With the exception of Tianjin, a directly-administered municipality that hasn’t yet released its target for 2022, the country’s 30 other provincial-level governments directly administered by Beijing have a weighted average GDP growth target this year of 6.1%, according to

That was on par with the weighted average GDP target set by all provinces and municipalities in 2021 and close to the nationwide goal of “6.0% or more” set in March 2021 by China’s top legislative body, CICC said. Beijing is expected to release its annual growth target for 2022 in early March.

– Grace Zhu contributed to this article.

DeRozan Opens Up About ‘Tough’ Road To Redemption

A nervy start to the week

Is Genesis Filing For Bankruptcy?