Buckeye Stock Market Report: Ohio State suffers total collapse against rivals, with everything on the line 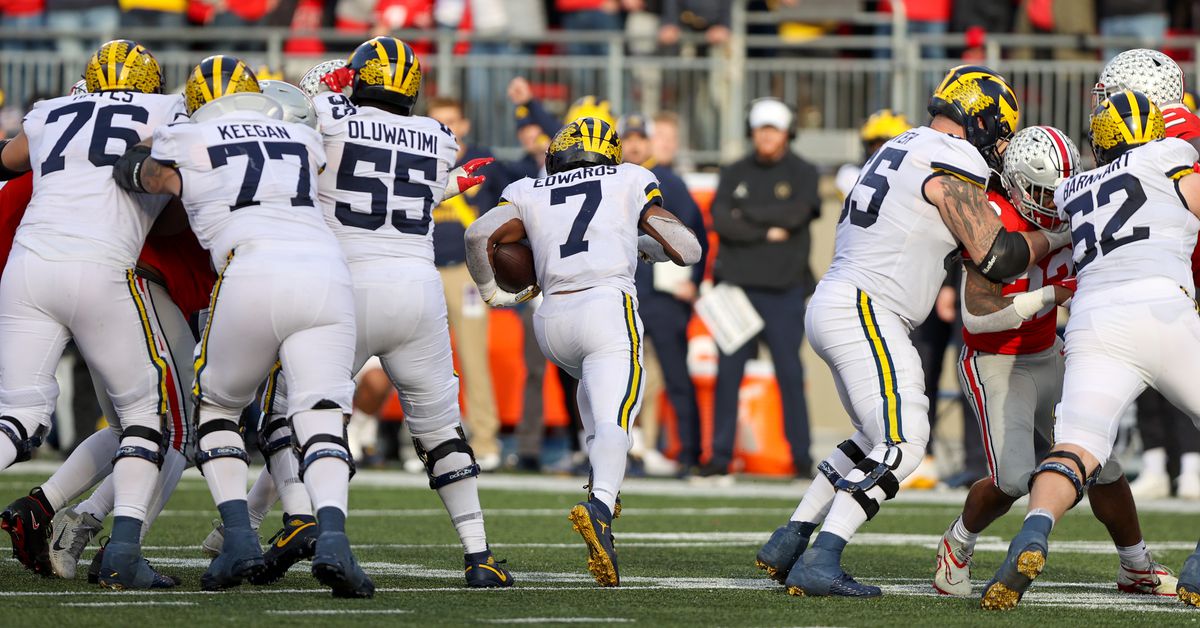 After each Ohio State game during the 2022 football season, LGHL will offer its market analysis of the Buckeyes’ performance. Using a standard bond rating system, we’ll evaluate the offense, the defense, and the special teams, according to this formula:

Then, we’ll take a look at any individual players whose performance stood out (in one way or another!) and assign them a stock rating: Blue Chip, Solid Performance, Penny Stock (akin to a junk bond, dangerously high risk).

How quickly it all happened. One minute you’re planning your weekend around the Big Ten Championship game and confirming the playoff dates; the next minute, you’re realizing that you may have already seen C. J. Stroud play his last game as a Buckeye. A couple of hours – and it was all over.

The game looked promising. The weather was beautiful. The crowd was huge and extremely loud. After a couple of tries, the dangerous Blake Corum was on the sidelines.

In fact, I thought that the Buckeyes started strong, had a good game plan on both sides of the ball, and controlled the game throughout the first half. OSU’s first drive moved steadily down the field and produced a touchdown after five minutes. The Bucks’ second possession stalled in the red zone but resulted in a field goal, making the score 10-3. The opening quarter ended with Michigan going three and out on its second drive.

Ohio State’s third possession, I thought, was key. The offense was in rhythm, Stroud was accurate, and Miyan Williams was playing running back. Maybe Ryan Day called too many running plays, using the not-100% Williams, I don’t know. But the Bucks found themselves fourth and two at the Wolverines’ 34-yard line. Stroud’s pass to Stover was just wide – incomplete. The Buckeyes turned the ball over on downs at a point when another TD would have altered the entire tenor of the game. Day never again chose to try to convert a fourth-down play.

OSU still controlled the game. Until they didn’t. The shift in momentum occurred on one play on UM’s fourth possession of the half. It was third and nine on Michigan’s own 31. The Bucks blitzed and almost got to J.J. McCarthy. Almost. But they didn’t, and he completed a 69-yard TD strike to Cornelius Johnson. Cam Brown got burned, but he was out there on his own. College football is a game of energy, emotion, momentum, confidence. All of those elements shifted to Michigan at the 7:26 mark of the second quarter.

Oh, Ohio State got another touchdown and another field goal before halftime to go into the locker room up 20-17. And the Bucks dominated the first-half stats. But that long TD pass and the play immediately after it – a 75-yarder – on first and ten on UM’s fifth drive put TTUN back in the game.

So, what all did the Buckeyes lose? They certainly failed to meet two of their season’s three goals, beating Michigan and winning the Big Ten championship. The national championship, their third goal, is possible, I suppose (see below), but seems remote. Ohio State lost its conference supremacy, something that they’ve enjoyed for nearly a decade. They lost bragging rights and dropped surely in their recruiting edge. It was said that the Heisman Trophy was Stroud’s to lose. He lost it, not winning the big game, not performing well. Face it, Stroud was considerably better in 2021 and even at the beginning of this season. If the Bucks don’t miraculously make the playoffs, don’t expect to see Stroud play in a meaningless bowl game. A lot was lost all around.

To some, it may seem harsh to give this lowest rating to an offense that produced nearly 500 yards. But the next highest rating is “adequate,” and this offense wasn’t. Oh, it was pretty solid in the first half. The Bucks picked up 16 first downs, 124 yards rushing, and another 191 through the air. They had seven (not counting the knee to end the half) first-half possessions and scored four times, two touchdowns, and two field goals.

The second half, obviously, was another story, as OSU was outscored 28-3. Seven first downs, 19 rushing yards, and 167 total yards. For the game, the Bucks produced 492 total yards but only two TDs. There were dropped passes, missed blocks, stupid penalties, and questionable play-calling. Ohio State didn’t seem to be able to pick up the crucial third (or fourth) down. Michigan was getting important stops.

I had said in a previous column that the Buckeyes needed big-strike scoring plays, and that they wouldn’t be able to count on consistent five-minute drives to produce points. The Bucks had only one – a 49-yard TD pass to Marvin Harrison, Jr. to provide a nice response to UM’s second long score. Harrison’s touchdown gave OSU their final lead of the game, 20-17 at the 3:49 mark of the first half.

For some reason, Chip Trayanum saw most of the carries. We saw Xavier Johnson playing some running back too. And they didn’t play badly. But was Williams hurt? What about Dallan Hayden, who had only two carries for the game? What about pass routes? Lots of wide plays, little up the field or over the middle, even though Stroud usually had all day to throw. Knowing that Stroud wasn’t going to run, the Wolverines focused on coverage and did a good job with it.

All in all, the offense didn’t get the job done. Twenty-three points weren’t going to beat Michigan.

If the offense was inadequate, the defense was worse. After starting off well, the Ohio State D gave up four touchdowns of 60 yards or more. Four? After yielding only one such play in the previous 11 games.

This disaster was a combination of at least a couple of factors. First was the defensive scheme. Jim Knowles was apparently hired to create a defense that would stop Michigan’s running game. Early in this game, the Bucks did. But, to do so, they had to move safeties up toward the line, leaving their dubious cornerbacks in one-on-one man coverage. They weren’t up to the task. Denzel Burke slipped, while covering Ronnie Bell, to give up a 32-yard completion that set up Michigan’s first field goal. Cam Brown missed his tackle in man coverage to allow the 69-yarder. Safety Cam Martinez was the one who got burned on the second long TD pass. In each case, they were in single coverage.

The second issue was, of course, execution. Although the Bucks succeeded in pressuring McCarthy, they couldn’t really get him. And they couldn’t rattle him. He had too much success. Ohio State has gotten by all year by covering speedy wideouts with their safeties. If you have a speed disadvantage, you need to rely on technique. Pass interference calls on Lathan Ransom and Ronnie Hickman were instances of poor technique. They were a step behind. They ran at the receiver. They didn’t look back. They committed the penalties. And they were costly – especially the one on Hickman that gave the Wolverines a first and goal at the two and permitted them to cap their 15-play, eight-minute drive with a TD that put them up by two scores.

The OSU defense ended up giving UM 242 rushing yards in the second half, most of them on long runs, very long runs, by Donovan Edwards. Again, where was the Buck secondary? Led to the other side of the field by receivers. Sucked into the middle. But, finally, simply gone.

Adequate is the word. Certainly, the special teams did nothing that would win a game, but Jesse Mirco punted pretty well, Noah Ruggles made his two extra points and three field goals, and Xavier Johnson had some good kickoff returns.

The blue chippers all wore blue in this game. Since this is an Ohio State site, I won’t go into detail, but I will recite the names: J.J. McCarthy, Donovan Edwards, Cornelius Johnson, Ronnie Bell.

Emeka Egbuka. In general, I thought that the receivers played decent games. Harrison, Jr. had his first dropped pass of the season but played pretty well, as did Julian Fleming. It was Egbuka, though, who had the best game. He made the catches; he made the plays. He seemed to be able to get open on slants over the middle – but not many were called. He finished the game with nine receptions for 125 yards and a TD.

All those guys who committed bad penalties. Ohio State had nine penalties for 91 yards. Of those, seven for 71 yards came in the second half. Michigan, the better-coached team, had no penalties in the second half. Gee Scott gets singled out for his bonehead head butt on the sidelines, an unsportsmanlike conduct call that, combined with Donovan Jackson’s holding penalty, put the Bucks at first and 35 after a big play was nullified. No excuse. Cade Stover was also called for unsportsmanlike conduct. I mentioned the two big interference calls. In addition to Jackson’s hold, linemen Dawand Jones and Paris Johnson had false starts. Sloppy play. Costly play.

Defensive secondary. All year the cornerbacks have been shaky. But the safeties have come through, and the offense scored lots of points. Yesterday, the cornerbacks were a severe liability. Burke, Brown, J.K. Johnson all played poorly. Michigan exploited them. Ransom, Hickman, and Tanner McCalister — all of whom have generally played well throughout the year — had subpar games. Probably because of the schemes they were playing.

Ryan Day and Jim Knowles. Both were badly outcoached by their Michigan counterparts. Day’s playcalling was conservative and unimaginative. Knowles’ left his defenders vulnerable to big plays. Neither made any necessary adjustments during the game. Things started well. Got bad. Got worse. Then caved in. I would expect new coaches to be hired, folks who can teach cornerbacks how to play.

So, what happens now? Theoretically, the Buckeyes still have an outside shot at a playoff spot. But the three undefeated teams – Georgia, Michigan, and TCU – are all ahead of them, as will be Southern Cal. Interestingly, the Trojans and the Buckeyes are the only teams with a single loss. A stumble by the front runners could open the door for the Buckeyes. But how would they fare against any of these teams? Or against two-loss Alabama or Tennessee, for that matter?

No, it’s probably time to start thinking about basketball.

Dow Jones Futures Loom: Market Rally Strong, But Here's Why You Should Be Cautious