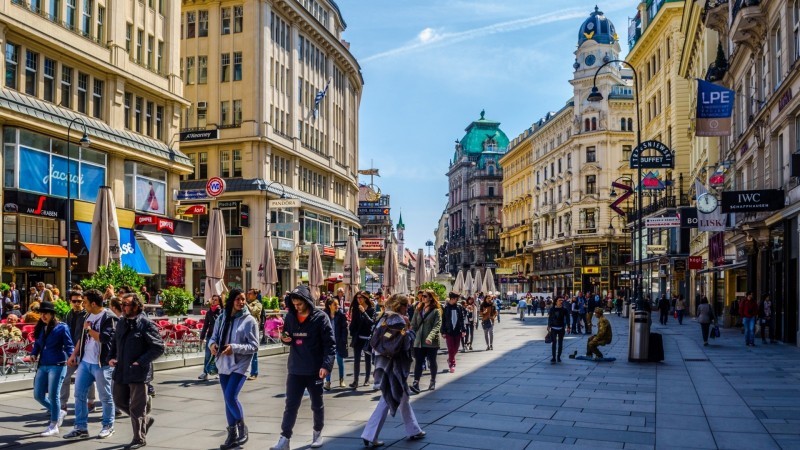 The Austrian economy was on its way back to pre-crisis levels just before the fourth Covid-wave hit the economy. On the back of a full lockdown, the alpine country’s economy contracted by 2.2% quarter-on-quarter in the fourth quarter of 2021. In the full year of 2021, the Austrian economy grew by 4.9%.

By the end of 2021, new infections were on the rise again across the eurozone, and Austria was no exception. In fact, Austria was the first country in the region to tighten containment measures and to bring compulsory vaccination into play to help control the pandemic. A lockdown for both the vaccinated and unvaccinated population was introduced in November, hitting the economic performance during the last three months of 2021.

Fortunately, looking ahead, it can only get better. The implementation of compulsory vaccination on 4 February will be followed by a far-reaching easing of restrictions – the closing time in hospitality will be shifted from 10 pm to midnight, from 12 February onwards the 2G obligation will no longer apply in retail shops and a week later, hotels and restaurants will again be subject to the 3G instead of the 2G rule. This should provide a tailwind for both private consumption and tourism. Industry is also in a relatively good position. As shown from Statistic Austria’s industrial production index, despite ongoing supply chain disruptions, industrial production increased in October and November.

However, persistently high inflation remains a risk. For the entire year 2021, inflation came in at 2.8% and in January this year headline inflation accelerated to 4.6% YoY, the highest inflation reading since the beginning of the timeline in 1990. And inflationary pressures are unlikely to abate any time soon as the introduction of a carbon tax (in July) is likely to push inflation higher in the second half of 2022. However, despite high inflation, household net income should rise on the back of both the tax reform that came into force on 1 January and expected wage increases in 2022 and 2023. We expect the Austrian economy to grow by 3.9% in 2022.

The tax reform, which also includes a reduction in corporate income tax, shows that the government is trying to lower the public debt ratio via higher growth rather than via higher revenues. The government debt ratio is estimated to drop from 84% of GDP in 2021 to 80% in 2022.

The seasonally-adjusted unemployment rate (Eurostat) stood at 5.3% recently, which is 0.8 percentage points above pre-crisis levels. Unemployment has recently been declining and until the fourth lockdown, short-time work was also on the decline. This brings the structural problems in the labour market into focus for the post-pandemic period, especially due to the ongoing shortage of skilled workers. A relatively high number of long-term unemployed, as well as older unemployed, who are having trouble finding their way back into employment, pose a challenge to the labour market. The large share of female employees working part-time also continues to be a structural problem. Thus, the Austrian labour market will need strong reforms post-pandemic, but for the moment, a further stabilisation and reduction of unemployment can be expected.

Compulsory vaccination will be helium to the economy, as it should boost both private consumption and tourism activity, although it could take until the second quarter for the effect to fully materialise. Looking ahead, the Austrian economy is expected to rise strongly and hopefully with plenty of strength to implement postponed reforms after the latest series of pandemic and political challenges.