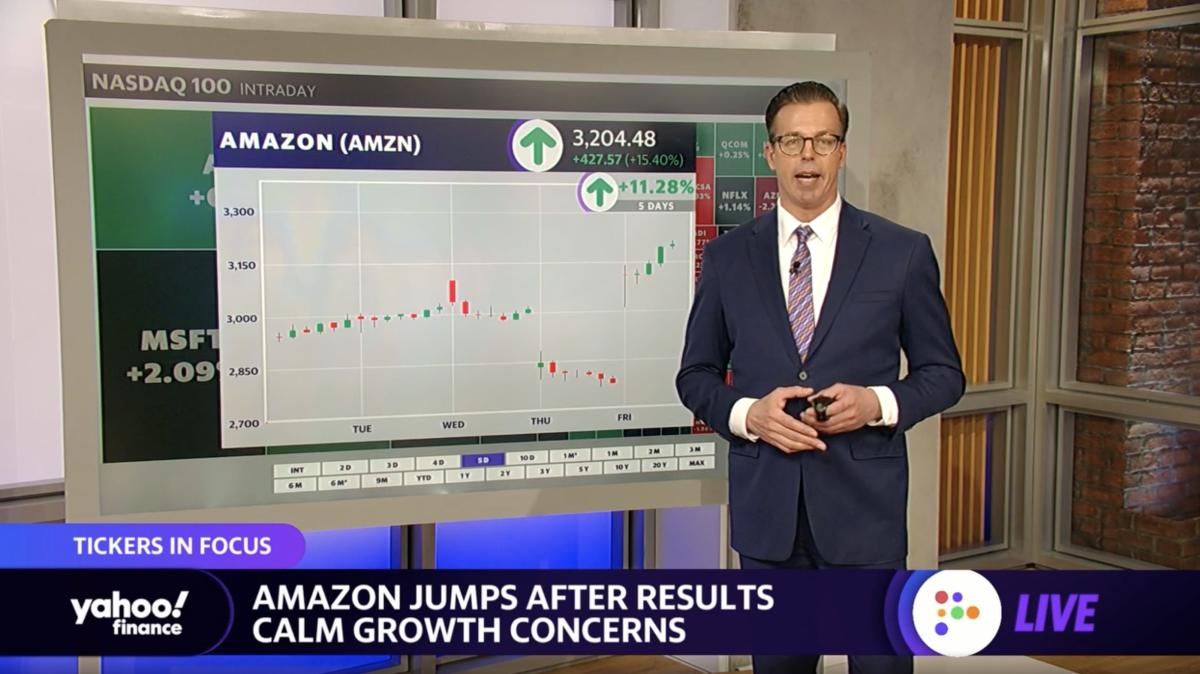 ALEXIS CHRISTOFOROUS: Let’s check in with Jared Blikre now for a look at some of our big trending tickers of the day. Take your pick because there are plenty of them, Jared.

JARED BLIKRE: Yes, I’m beginning with Amazon. That stock is up 15%. And I was just checking out an intraday chart. I’m going to take this back 10 years because that’s how far you’d have to go back to find another day where you have these kinds of gains in this stock. And went back in 2011, 2012, I believe it was, you can’t even see the bars down there. It was quite a different game for them, although Amazon Web Services, guess what? Their cloud computing business was just getting off the ground. And that was a major catalyst in this earnings announcement as well.

Also Prime membership, they’re raising their price for me and for everybody else in the US by at least $20. If you’re paying on a monthly basis, it’s an extra $2 per month. So that pretty much indicates to the Street that they have pricing power. And that means more returns for their shareholders.

Also, only two days ago, it was Facebook that had the biggest market cap wipe-out in history, at least in one day. That was $250 billion. Amazon set now for the greatest increase in one day that any company has ever seen, so pretty interesting to see that play out.

Now I do have some analysts’ commentary here, Bloomberg Intelligence saying amazon.com’s online revenue gains may slow in 2022, but the potential for continued growth in cloud services, streaming, and advertising, that remains a catalyst. JP Morgan recommends the stock with an overweight rating. And they moved their price target up to $4,500. You’re going to see that’s $1,300 above the current price. And they’re saying that Amazon delivered a solid fourth quarter retail performance and also strong AWS numbers against a tough macro and e-commerce backdrop.

Outlook for the first quarter, better than feared. Also seeing macro pressures persisting in 2022 with more Omicron-related disruption and also with greater normalization. They’re expecting that Amazon can see a path out of elevated labor costs. I think everybody would like to see that path– excuse me. So Amazon just having a monster, monster day here.

KARINA MITCHELL: Yeah, and I think the NFL games on Amazon Prime has something to do with the subscription increase there, Jared. I want to talk about Ford. It’s reversing gears, dropping after a big miss in earnings and eclipsing their 2022 outlook.

JARED BLIKRE: Yeah, and let’s take a look at the charts here. Ford, this is– actually, if you take a look at over what’s happened over the last year, this has been a high flyer. But when you look at the candlestick action recently, hard to see it here. I’m going to take this one-year down to a six-month. We did have this consolidation. We managed to break to the upside here. And then we kind of fell off.

So normally, what would happen, this would form some kind of head and shoulders technical pattern. Instead, it just gapped below it. So that’s a pretty weak signal there. Nevertheless, Ford has been gearing up and really doubling down on EV, as we know. They just committed a few days ago to spending $20 billion to really make that full pivot toward electric vehicles.

I do have some analyst commentary here. So let’s see what Credit Suisse has to say. They’re recommending the stock with an outperform rating. And they’re saying while Ford’s fourth quarter minutes was disappointing, the focus should be the 2022 guidance which shows Ford is continuing its path of improvement with growth in the face of the automaker’s peak earnings concerns.

However, with a wider following into the print and with Ford ending its streak of six straight significantly quarterly EPS beats, some disappointment over the fourth quarter miss would drive the stock lower. In other words, expectations had gotten ahead of the traditional vehicle maker, and maybe they’ve ebbed slightly.

I do have a little bit more commentary from Wells Fargo recommending the stock with an overweight, saying despite its bullish full year outlook, Ford guided down to first quarter, down to high single to low double– excuse me, from high single to low double digits. And that’s over year over year, driven by supplier disruptions. And that’s related to the Omicron virus and semiconductors.

Now one sobering fart– one sobering start follows a disappointing end to 2021, as the fourth quarter EBIT– that’s earnings before interest and taxes– was at the midpoint of guidance versus consensus at the high end. So Ford, a little bit of disappointment here, but still holding onto gains of 34% over the last six months.

ALEXIS CHRISTOFOROUS: Yeah, it seems like an overarching bullish story, though they are under the hood– pun intended. Got to ask you about cryptocurrencies because Bitcoin I think having its best day since, what, October. It’s back above $40,000.

JARED BLIKRE: Yes, how about that? Nice to see the price action here. We got liftoff at about 10:00 AM. Didn’t see any fundamental catalyst right here. But the technicals kind of tell the story. So I’m going to put it back to a six-month candlestick chart because I think this is pretty instructive. We can see that we’re firmly in a downtrend here from this peak, which was just shy of $70,000. And as you noted, the best day since October. In fact, that was October 1st. I checked this. It was this bar right here.

So if you’ll notice, that was really the start of this next– or of that previous movement to record highs or what would become record highs. However, not getting too excited just yet because we have a little bit more technical damage to become undone. We need to start closing above this. But if we were to launch higher the way here, we only consolidated for a couple of days before that move to break– move breaking to new highs here. So the technicals in Bitcoin finally starting to turn around, at least in the very short time term frames. But in the mid-term, still a little bit bearish.

ALEXIS CHRISTOFOROUS: All right, Jared Blikre, thanks so much.

AAG Partners With Simplex To Bring Fiat On-ramping To MetaOne®…..

Trump says he left Biden a perfect economy, but the facts say otherwise

Memecoin Pump Sets To Propel Shiba Inu And Rocketize On…