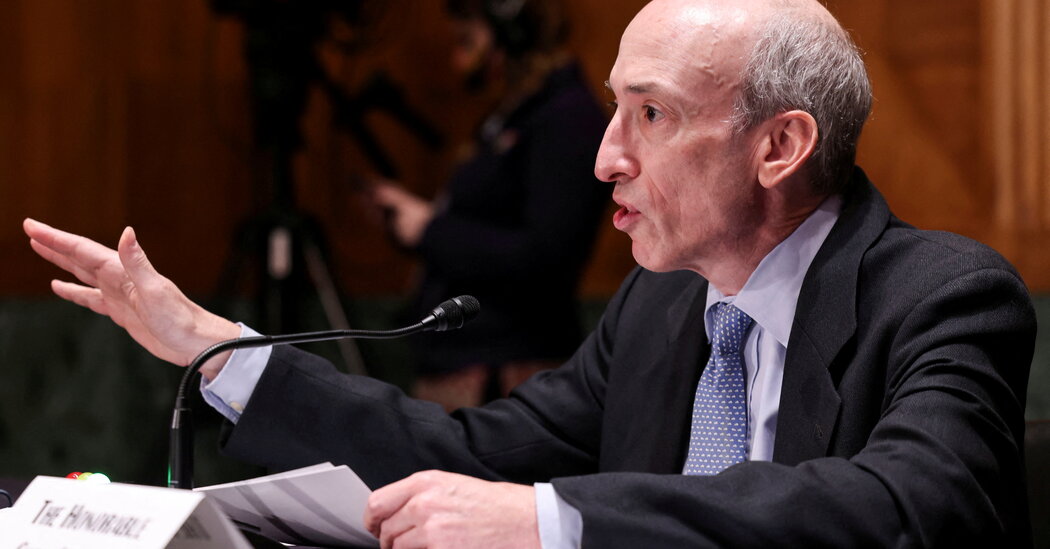 The Securities and Exchange Commission wants to shorten the time it takes to complete a stock trade, a change agency officials believe will reduce market risk, according to a proposal announced on Wednesday.

Right now, there is a two-day window between when a trade is agreed upon between a buyer and a seller and when the money and the stock in question change hands. The S.E.C. is proposing to cut that time in half, to one day.

“As the old saying goes, time is money,” Gary Gensler, the S.E.C. chair, said in a statement emailed to journalists on Wednesday. “Shortening the settlement cycle should reduce the amount of margin that counterparties would need to post with clearinghouses.”

Central clearinghouses are responsible for overseeing trading activity and ensuring that trades are completed and market obligations are met. If a brokerage fails, a central clearing facility is supposed to step in and cover the cost of the mismatched trades.

The S.E.C.’s proposal won’t go into effect yet. The agency will first seek public comment, then can make revisions before the five-member bipartisan commission votes on it.

The move comes a year after retail investors joined forces to buy up shares of GameStop, AMC and other struggling companies that some hedge fund traders had shorted. To short a stock, a trader borrows shares from a broker for a fee and sells them immediately, expecting to buy them back when the share price falls, return them to the broker and pocket the difference. But during last year’s retail mania, demand for individual shares rose well above what market participants expected, causing stock market panic.

Hedge fund traders who had bet that the shares of GameStop and AMC would fall scrambled to find shares of the two companies to cover their bets as the share prices rose instead. Brokerages risked running out of money in the quest to meet obligations to their customers. A few brokerages, most notably Robinhood, had to temporarily stop investors from trading the stocks as a result.

If such an event were to happen again, the S.E.C.’s proposed change would make it more manageable by requiring all stock trades to be completed more quickly. The proposal would force traders and brokerages to identify, in as close to real time as possible, where the money and the stock shares were coming from to fulfill each trade. It would also direct central clearing facilities to start building systems that would eventually allow “fully automatic” trade processing.

Susanne Trimbath, an economist who has studied market structure for decades and who in the 1990s worked for a subsidiary of the Depository Trust & Clearing Corporation, which runs the central clearinghouse for stocks, said that the proposal was a baby step toward the safest possible market structure: near-instantaneous trade clearing.

The corporation’s stock clearing facilities are “systemically important financial market utilities,” Dr. Trimbath said, a term established after the 2008 financial crisis. Federal officials have deemed these institutions crucial to the functioning of financial markets and the economy. This means, according to Dr. Trimbath, that the government might have to support them with taxpayer money if they reach the brink of failure.

The clearing facilities could be destabilized by a large-scale panic caused by too many failed trades, Dr. Trimbath said. Shortening trade times would reduce the risk of that happening, so it would be good for taxpayers, she said.

“If something goes wrong, we don’t want to be in a position to bail them out.”

CDC Has Yet To Authorize Covid Vaccine For Kids Under 5

CDC Has Yet To Authorize Covid Vaccine For Kids Under 5

What Warren Buffett Can Teach Us About Handling Bear Markets

As the Economy Shifts, Retail Investors Step Away